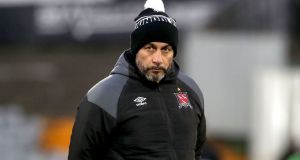 Dundalk’s reign as League of Ireland champions is soon to come to an end, with the back-to-back champions 18 points behind Premier Division leaders Shamrock Rovers and with fixtures quickly running out.

However despite disappointing domestically the Lilywhites have arguably bigger fish to fry this term - they stand one game away from reaching the group stages of the Europe League, which brings with it both prestige and a sorely-needed cash injection.

Football’s increasing woes in the face of the Covid-19 pandemic are well known, so the roughly €4 million prize money which would enter the Oriel Park coffers for reaching the group stages is not to be sniffed at.

Standing in the way of Dundalk are Klaksvíkar Ítróttarfelag of the Faroe Islands, who have arrived in Dublin ahead of Thursday night’s clash at the Aviva Stadium.

It has been a difficult year for football in general, and with more uncertainty ahead victory over the Faroese champions would be a major boost for Dundalk and perhaps even the League of Ireland as a whole. Here is everything you need to know.

The final round of Europa League qualifying, as Dundalk take on Klaksvíkar Ítróttarfelag - better known as KÍ. The match takes place on Thursday October 1st at the Aviva Stadium (kick-off 7.30pm).

Nope. Uefa fixtures remain behind closed doors due to the coronavirus pandemic.

RTÉ have swooped in to provide live coverage of the match, starting at 7pm.

Founded back in 1904, KÍ are the 18-times champions of the Faroe Islands, and 2019’s title win was their first for 20 years. Managed by former Faroese international Mikkjal Thomassen they play at the Við Djúpumýrar stadium in Klaksvik, which can hold 2,500 supporters - 524 seated. Klaksvik, a proud fishing town, has a population of just over 5,000 people.

Transformed under Thomassen after he took over in 2015, KÍ would be the first side in the history of the Faroe Islands to qualify for a major European competition.

Like Dundalk, KÍ’s started in the Champions League qualifiers, where a Covid-19 outbreak saw them handed a 3-0 win and a first round bye against Slovan Bratislava. In the next round they were landed with a tough trip away to defending Swiss champions Young Boys, and they held their own in a 3-1 defeat in Bern.

KÍ then dropped into the Europa League qualifiers where they caught the eye with a 6-1 thrashing of 1981 Cup Winners’ Cup winners Dinamo Tbilisi, in the Faroese capital Tórshavn. That result set up Thursday night’s clash in Dublin.

It has been a strange season for the Lilywhites. Vinny Perth was fired in August, bringing his long association with the club to an end, and was replaced by the unheralded Italian Filippo Giovagnoli.

Perth’s exit came off the back of a 3-0 Champions League qualifier defeat away to Slovenia’s Nk Celje. They then dropped into the Europa qualifiers, where they squeaked to a 1-0 win over Inter Club d’Escaldes in Andorra.

That victory set up a third round qualifier against Sheriff Tiraspol, again on the road. The sides drew 1-1 in 90 minutes and couldn’t be separated after extra-time, but the visitors held their nerve in the shootout to win 5-3. Giovagnoli is now one game away from emulating Stephen Kenny and returning Dundalk to the group stages.

Dundalk were beaten 4-0 at home by Shamrock Rovers last Sunday, with Giovagnoli making 10 changes to the side who beat Sheriff. Chris Shields was the only survivor and he is suspended for the visit of KÍ, meaning the Italian will should be able to field a fresh XI at the Aviva Stadium.

As for KÍ, they haven’t played since their thrashing of Tbilisi so should have plenty of fresh legs. Their starting line-up for that fixture included nine Faroese players, with 30-year-old forward Páll Klettskarð helping himself to a hat-trick.

Should Dundalk win on Thursday night it would their first appearance in the Europa group stages since 2016-17, when they were drawn to face AZ Alkmaar, Maccabi Tel Aviv and Zenit St Petersburg. The Lilywhites picked up four points during that campaign, ultimately finishing bottom of their group.

Progression to the group stages will bring with it around €4 million, which would be a boon for the club in normal circumstances but would be even more welcome with supporters still locked out of matches.

Dundalk are odds on favourites for Thursday’s play-off:

Anything else to watch out for?

Celtic are also in action on Thursday night, as they travel to take on Fk Sarajevo (kick-off 7pm). Tottenham, who played on Tuesday in the League Cup, take on Maccabi Haifa at home (8pm), while Rangers face Galatasaray at Ibrox (7.35pm) - a fixture which will be a slightly different proposition with no supporters present.