Dundalk bounce back as they hit Finn Harps for four 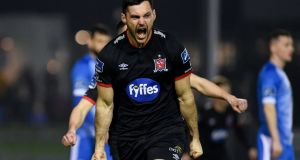 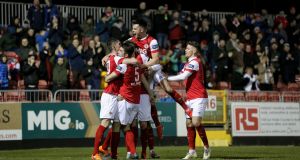 Champions Dundalk bounced back from last week’s first defeat of the season with an assured performance against a battling Finn Harps in Ballybofey.

First half goals from Pat Hoban and Michael Duffy paved the way for victory and the Lilywhites to go back level on points at the summit with Shamrock Rovers, who play Sligo on Saturday.

Duffy set up the opener on the left side of the box as he laid the ball off to Hoban who looked up and placed his shot beyond the outstretched arm of a despairing Mark Anthony McGinley after just three minutes.

Given Harps’ recent miserable record against Dundalk, there were understandable grounds for concern in the home camp after conceding so early on. In their last 11 meetings, Harps had conceded 34 goals and scored just one.

But Harps responded positively and took the game to the visitors.

Towering 22-year-old Austrian striker Alexander Kogler - who looks a decent acquisition - was nearly in only to be denied by the alert Greg Sloggett.

And on 13 minutes Harps went close to an equaliser with Mark Russell’s curling effort tipped away for a corner by Gary Rogers.

But Dundalk pounced on the counter-attack on 37 minutes to double their tally.

Hoban played a delightful ball out to Michael Duffy who ran into the box and picked out the supporting Daniel Kelly.

Kelly, though, smacked his shot off the crossbar - but Duffy was on hand to follow up and stab the ball into the net.

Dundalk put the game beyond Harps on 51 minutes. Dane Massey’s initial shot was blocked by McGinley but Hoban nipped in to tuck away the loose ball.

Harps kept battling and Sean Gannon had to clear a Kogler header off the line but Dundalk added a fourth on 83 minutes as Sloggett nipped in to score from close range for what was ultimately a flattering scoreline.

Billy King capped his club’s player-of-the-month award with a cracking second half winner to get St Patrick’s Athletic back on track.

The victory came as a relief to home manager Stephen O’Donnell as he finally saw his first goal and win at Richmond Park since taking charge at the tail end of last season.

Though they enjoyed all the ball, St Pat’s struggled to really trouble City’s well-marshalled defence; captain Chris Forrester forced a save from Mark McNulty from a free-kick in the highlight of the first half.

The game finally sparked to life 10 minutes into the second half with a delightfully contrived and executed goal from St Pat’s.

Midfielder Lee Desmond picked out King’s run in behind the City cover.

The former Scotland Under-21 international winger controlled the ball superbly with his first touch before side-footing confidently past McNulty.

Having worked so hard for their lead, St Pat’s sloppy defending almost gifted Cork an equaliser within two minutes.

Daire O’Connor hooked a cross to Cian Coleman in the area with Brendan Clarke having to race off his line to make a good save with his feet.

Normal service soon resumed at the other end as Dan Ward skilfully made space only to drive a shot over the top.

King then swung in a superb cross in from the left which saw Rennie plant a header off the crossbar.

The game was then delayed for some seven minutes for an injury to St Pat’s defender Ollie Younger who was taken off on a stretcher.

Cork then blew a chance to level in stoppage time when sub Reyon Dillon headed over from Charlie Fleming’s cross.

Substitute Shane Griffin earned Waterford their first home victory of the season by firing in last-gasp winner against Derry City.

After two successive defeats, Sam Bone smashed a rocket of an equaliser two minutes before the break to cancel out Stephen Mallon’s opener for Derry City, before Griffin won it at the death with a rasping 25-yard drive.

Derry lacked a spark early on and it took a former Waterford player to fashion their first chance on 23 minutes.

Walter Figueira was surrounded by two defenders when receiving Mallon’s pass but swivelled beyond both to fire a cross along the six-yard box that was too powerful for Tim Nilsen to connect with.

More quick thinking by Derry delivered the breakthrough on 32 minutes.

Kevin O’Connor switched off momentarily when conceding a free-kick on the left to allow his victim swiftly find Mallon.

His fellow winger advanced at pace and arrowed his low shot inside Brian Murphy’s near post from an acute angle.

Waterford plundered their equaliser three minutes before the break, also from a set-piece.

Kevin O’Connor made amends by delivering the corner that fell for Cummins to tee up Bone on the edge of the box. On his weaker left foot, the midfielder unleashed a first-time rocket high into Cherrie’s top corner.

Waterford continued to be the better side but missed chances by the two O’Connors, Kevin and Michael, looked ominous until the winner arrived on 94 minutes.

Griffin, on for the last 15 minutes, scored from distance when Michael O’Connor’s initial shot was charged down by Conor McCormack into his his path.