Derry aiming to finish the job and clinch European place 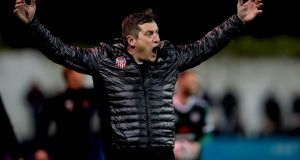 Derry boss Declan Devine: “This club, this group of players deserve European football for their efforts over the course of the season, but they have to earn it.” Photograph: Ryan Byrne/Inpho

Proponents of playoffs might point to tonight’s fixture list as making a decent case for mixing things up a bit with only the last of the Europa League spots even remotely up for grabs on the final night of the season.

Stephen O’Donnell takes his new side back to his former club Dundalk needing another big result to go with the midweek win in Derry and an even bigger favour from Finn Harps who are themselves at the Brandywell if St Patrick’s Athletic are to be in Europe next summer. Ahead of the game he talks only of getting as many points as possible.

Declan Devine, is openly focussed on completing the job after Tuesday’s slip up and does not sound in the slightest complacent despite his side having a two -point advantage over the Dubliners and a much better goal difference which means they effectively require a point to guarantee European football.

“It’s a North-west derby and they are never anything other than tough,” he says. “Harps came here in the League Cup with players missing and they proved a handful then, so we are preparing for exactly that – a tough game.

“We let ourselves down on Tuesday night but we have another chance on Friday and we have to approach it correctly. This club, this group of players deserve European football for their efforts over the course of the season, but they have to earn it. The boys know what they have to do and this is their chance to do it.”

Both managers have full squads to choose from ahead of their respective games while Dundalk and Harps have Sean Hoare and Sam Todd suspended respectively.

Shamrock Rovers will rest Dylan Watts for Cork City’s visit as Stephen Bradley seeks to keep everyone fit for the FAI Cup final while Waterford are without the likes of Kenny Browne, Cory Galvin and Sam Bone for the visit of already relegated UCD.

The mood was more upbeat around Bohemians on Thursday as they confirmed that Rob Cornwall and Dinny Corcoran are on board for next season although Friday’s game against Sligo Rovers will be Derek Pender’s last League of Ireland game with the 35-year-old club captain calling it a day after 16 campaigns.

“I’ve been telling him [manager Keith Long] for three months I’m going to retire. I told him again on Monday and he was like: ‘Are you serious, you’re going on Friday?’

“I know my body and I could possibly play for someone in the First Division but after the journey we’ve been on, I couldn’t sign for another club, to be honest.”

His wife, Jennifer, is due to be in Dalymount with their two kids, Alex and Danny, to see him play for the very first time.

“I had to force her to come,” he says with a laugh before adding: “she’s been behind me since Belvo U14s when we started going out and still to this day.”

Asked about his toughest opponent, he goes for Paddy McCourt.

“I was playing for Dublin City and Dermot Keely told me to man-mark Paddy and not to get sent off. I got sent off. It was hard. More recently, Michael Duffy has been the best I’ve played against.”

For the second leg of the First division play-off (1-1 after last week’s game) Cabinteely have Kevin Knight back from suspension while Drogheda United have a full squad available.