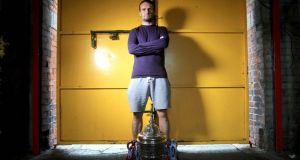 All that talk from managers about “projects” in football could throw you when you meet St Patrick’s Athletic winger Conan Byrne these days.

The 29-year-old is back in college, studying to be a teacher, and when he mentions in advance of this weekend’s Ford FAI Cup final that he had a project, it’s in the sense of looking at his watch, and thinking: “I’ve get to get away from here and off to the library.”

Byrne has had a full week of it, working nine to five at his studies and swinging by the club as required. It’s taken discipline from the player and understanding from his manager as he looks forward to a time when he won’t have football but the pair reckon they have a project or two to wrap up together before then.

Liam Buckley first signed Byrne from UCD seven years ago and the pair have been close ever since. The manager gives Byrne a special mention when he talks about the sort of characters he has at his disposal heading into Sunday’s game against Derry City.

The player cites Buckley as just about the biggest influence on his career, someone who saw something in him when he was a younger and has been better than anyone else at getting it out ever since.

Never more so than this season – with Byrne getting a remarkable 25 goals, 18 of them in the league, and a long list of assists, mainly for Christy Fagan, who he has helped become a 20 goals in a league campaign player.

It is, says Byrne, his best season to date, although, he repeatedly points out, it needs to get better. There needs to be silverware to show for his and everyone else’s efforts by Sunday evening or the whole thing will end up being remembered with regret.

“Yeah, with the goals, the assists, and my overall play, I’d say so, yeah, it’s been my best but really that won’t count for anything unless we win on Sunday.

“I’m delighted for Christy, though, it couldn’t happen to a nicer fella. He’s a lovely chap and he only lives down the road too. The fact that I set it up for him means a lot to me, we’ve done it all season, set goals up for each other and somebody said to me that we’re only the fifth partnership to score more than 38 goals in a League of Ireland season.

“A lot of it’s down to the manager’s influence,” he continues. “His philosophy is to get the ball down, to play football and to create chances by going wide. He gets the best out of me.

“After Sporting Fingal I didn’t have a particularly good two seasons at Shelbourne. I scored goals but I didn’t do particularly well and didn’t play every game but Liam has shown a faith in me and if I have had a bad game he’s taken the approach that it was just one game.”

He’s featured in two cup finals before. One for Sporting Fingal, one for Shelbourne, and admits to remembering more about the first, which was won, than the second.

“Great occasions but that’s the way football is, you take more away from the ones that go well than the ones that don’t, you kind of want to forget about them, to move on.”

Inevitably the question of St Patrick’s cup famine raises its head and Byrne admits that most of the players are relatively untouched by it.

“Maybe it affects the players who supported Pats, the likes of Brendan (Clarke) and Ger (O’Brien) and Ian (Bermingham) that bit more. But that’s not to say that the rest of us don’t think about what it would be like to be the ones to end the run for the fans, for ourselves and the club. There were some people last year who said to me that they’d have preferred the cup when we won the league, so we’re under no illusions about how much it means.”

Derry, he says, will take some beating on the day but, like Buckley, he believes it can be done if the Dubliners play to their potential.

Before that, he’ll be looking out for UCD tonight in the promotion/relegation play-off. The affection he feels for the club where he started his senior career is clear.

“If I had a son with a choice to make about what club to sign for, I’d encourage him to sign for UCD, they’re a great club to start out with. They gave me a great opportunity and I really enjoyed my time there.”

He may have to put the game out of his head until after it’s over this evening, though. Somewhat ironically he’s got a project to get done.