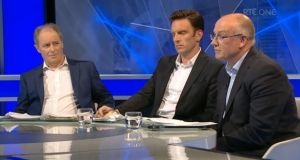 Former Republic of Ireland manager Brian Kerr was heavily critical of the FAI’s running of the Irish domestic game on Monday night.

He said the €5,000 strategic planning grant given by the FAI to each club in the top two divisions of Irish football was a pittance.

The discussion followed the decisions in recent days by the boards of St Patrick’s Athletic and Derry City to reject the offer of the grant and Dundalk’s success in the Champions League.

Mr Gavin explained that, following a recommendation made in the Conroy report, the grant was intended to help each club create a strategic business plan, something he said would cost at least €3,000 per club.

“When the clubs have their plans we will look at how we can bring those plans to fruition.”

An irate Kerr argued that the €100,000 could be better spent on promoting the league and boosting the commercial aspect of the game.

“We don’t have any dedicated people involved in running the league.”

He continued: “The frustration levels across the league are remarkable . . . all around the country there are ferociously bad facilities and nothing has been done about it for years.

“Talking about strategic planning now is a load of bunkum.

“You’re all a fuss about Dundalk this week, why isn’t there this fuss about the league before the season starts, people don’t even know when the fixtures are on.

“I’m talking to managers every day and they are not impressed by how the league is being run. The clubs are afraid to challenge the FAI.

Mr Gavin said the clubs had expressed a desire for the FAI to continue overseeing the league, to Kerr’s disbelief, before concluding: “It never ceases to amaze me the ability of some commentators on the game, including some around this table, to turn a positive into such a negative.”