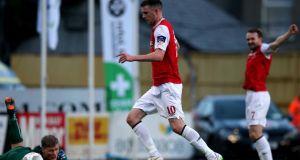 St Patrick’s Athletic made a short but fruitful journey across the Liffey as they defeated Bohemians at Dalymount Park.

There was almost a dramatic start to proceedings as Christopher Forrester released Ciarán Kilduff through on goal inside 13 seconds but the former Shamrock Rovers attacker lacked sufficient composure as he fired wildly wide from 14 yards.

The breakthrough arrived in the 35th minute as a superb Forrester pass allowed Conan Byrne a free run at goal and although Dean Delany bravely blocked the initial attempt, Kilduff was on hand to fire home the rebound from six yards.

Bohemians looked a greater threat in the second-half with top scorer Adam Evans introduced to partner Dean Kelly in their attack although their efforts hinted at desperation on 57 minutes as Patrick Kavanagh was deservedly shown a yellow card following a dive inside the penalty area.

The contest should have been settled in the 70th minute but Killian Brennan’s penalty kick was placed too close to Delany, who palmed to safely, after Derek Prendergast had clumsily challenged Kilduff inside the penalty area.

With the Saints ceding further territory with every minute, Bohs enjoyed a monopoly on possession in the closing stages but a lack of guile in the final third proved their undoing.