Shelbourne took the lead through Emily Whelan before comeback 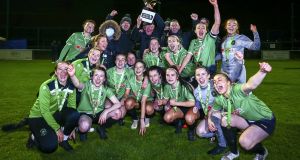 With the 2020 Women’s National League title on the line in a Dublin derby with Shelbourne, Peamount United came out on top as 3-1 winners in PRL Park to defend their league title.

Ireland international Áine O’Gorman scored twice and Karen Duggan got one as they fought back from Emily Whelan’s opener for Shels.

In front of Republic of Ireland manager Vera Pauw, it was a tight first half with few goalscoring chances created as victory for either team would have seen them crowned as league winners.

But less than a minute into the second period Whelan fired in even though goalkeeper Niamh Reid-Burke did get a hand to it. Shels celebrated as Peamount were left stunned.

The game started to open up after that goal with Duggan pulling the strings for the home side, while Ciara Grant and Whelan impressed for The Reds.

On 66 minutes, Shels broke away and Rebecca Cooke looked certain to score but before she could unleash a shot O’Gorman came out of nowhere with a superb tackle to deny her.

Then up the other end O’Gorman showed her class by scoring her 13th League goal of the season from a direct free-kick, after Duggan was fouled on the edge of the penalty area.

That goal gave Peamount confidence and they took advantage as Duggan got in front of her marker to head in past Shels goalkeeper Rachael Kelly.

Grant had a fantastic opportunity to level matters on 85 minutes but the Shels midfielder failed to fully connect with the ball.

With that the game slipped away from them as O’Gorman got her second of the night when hooking the ball in from close range and that wrapped up the League win with a game to spare.