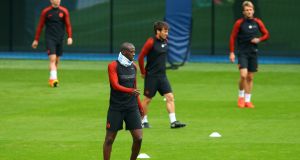 Yaya Touré has only played one game for Manchester City this season, it was against Steaua Bucharest in a Champions League qualifier in August. Photograph: Getty Images.

Whatever happened to Yaya Touré? It’s a question worth asking at this time of Manchester City crisis, as they sit there, top of the Premier League. After all, even Pep Guardiola mentioned Touré this week.

Guardiola said he would “like” to have had Touré available for selection for City’s League Cup tie at Manchester United on Wednesday night. It was a blast from the past from a manager who seems to be all about the future. For emphasis Guardiola added: “Believe me.”

If we take Guardiola at his word, then there is a willingness on the City manager’s part to not just shake hands with Touré but to name him in the starting XI.

That really would be something: Touré may not be part of Guardiola’s City but the rest of the Premier League know all about the Ivorian.

Unquestionably his presence would give City another dimension, and a different one. It would make others worry, too. For example, were Touré going with City to West Bromwich Albion today, he would be going as someone who has scored at the Hawthorns on City’s last three visits. West Brom’s players know this.

However, if Guardiola was indulging in some verbal sport with Touré, and “Believe me” was only a turn of phrase aimed at someone known to have played that game himself, then it really is all over at Man City for the 33-year-old midfielder.

It seems such a grand waste of talent and investment but, after six-and-a-half years at City – during which time, he has driven them to two Premier League titles, an FA Cup and two League Cups – Yaya Touré will soon be off.

January will bring obits on Touré’s time in Manchester and what should perturb him is that they will mention flounces surrounding birthday cakes and a yappy, disruptive agent as much as the goals and the games. January 2017 may not be kind.

Unless, of course, there is a reconciliation between Touré and Guardiola.

The new manager has shown that he is prepared to pick the midfielder he sold from Barcelona – to City. Touré’s one appearance this season was in August when he played 90 minutes in the Champions League qualifier against Steaua Bucharest. But a month later Touré’s agent was describing Guardiola as “vindictive” and the Spaniard has demanded an apology. Until it comes, Touré will not play.

Touré is though, still on the payroll – at £225,000 per week, or £13 million a annum. It could be said Touré is paid so well he does not need to work. A consolation – aside from cash – is that in years to come Touré’s status will be greater. There will be historical recognition of his contribution. That’s usually the way it goes.

But that’s when he’s finished. What about now?

Touré has made 269 appearances over six years for City, some of which were decisive in the transformation of the club. For starters there was the goal against United at Wembley in the FA Cup semi-final of 2011. That was a breakthrough moment for City and, having made it, they went on to win the final 1-0 against Stoke. Yaya Touré scored the goal. It was City’s first major trophy for 35 years.

Albeit in a very different form from the Maine Road original, Man City were back.

The same week one year later and City were drawing 0-0 at Newcastle as the game moved into the second half. Manchester United, meanwhile, were 2-0 up on Swansea and, as it stood, were two points ahead of City on the season’s penultimate afternoon.

Then Yaya Touré scored, then he scored again. City were top again and needed to win the last game to be champions for the first time since 1968. This led to the Sergio Agüero moment, but without Touré the previous weekend, Agüero would not have had a moment to have.

It is in the present tense but it is also in the past.

That’s what’s happened to Yaya Touré. His present became tense and he probably noted that Ilkay Gündogan, effectively his replacement at City, was pictured being given a birthday cake from a fan on Monday. If Touré pouted over this, well, that’s part of the problem.

It is up to Yaya. He has changed Manchester City before and he might be able to do so again. It sounds as if Guardiola is willing to listen.

As the singer said: “No matter how far you’ve gone, you can always turn around.”

Yaya Touré is not alone, there are a couple of other distinguished midfielders in Manchester of around the same age who are being overlooked.

True, neither Bastian Schweinsteiger (32) nor Michael Carrick (35) have painted themselves into a corner quite like Touré, but, particularly in Schweinsteiger’s case, the consequence is the same. Germany’s World Cup-winning midfield leader is nowhere to be seen at Manchester United, unless it’s outside Old Trafford on Wednesday in his civvies.

And as with Touré, a question is to be asked about the benefits of Schweinsteiger’s isolation.

It is José Mourinho’s right to assess the clutch of midfielders at his disposal – Pogba, Herrera, Mata, Schneiderlin, Fellaini, Young, Carrick – and consider Schweinsteiger one too many.

And the former Bayern Munich man has hardly been dynamic since joining under Louis van Gaal. Yet there are ways and means and just because Schweinsteiger is not rated by Mourinho, it does not mean he is under-valued as a player – and as a team-mate – by his colleagues.

That can have a destabilising effect.

Similarly, the use of Carrick so sparingly – he has had 12 minutes of league football this season – becomes an issue when he plays in the Europa League or League Cup and impresses.

This is not to argue that Carrick could influence Premier League games the way he did once, but he remains a skilful, effective resource.

Not unlike Yaya Touré.