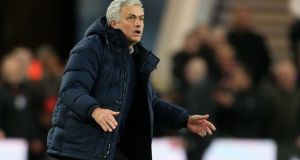 Jose Mourinho: if Tottenham reel in fourth-placed Chelsea and it will be an even greater achievement by the manager than steering Manchester United to a second-place finish behind Man City in 2018. Photograph: Lindsy Parnaby/AFP

José Mourinho was adamant. He said it had “nothing” to do with him and that he would “hate it” if anyone attributed the sudden upturn to him.

“I made no impact,” he protested. “Nothing. I just helped them a little bit to win this match.”

Rewind seven weeks and Tottenham had just won their first Premier League game since September. There was a sense of relief, a feeling that a line had been drawn under a troubling, turbulent start to the season. Admittedly a 3-2 victory at West Ham was hardly a cause for cartwheels but Spurs had led 3-0 ahead until the Hammers’ late, futile rally.

It was then Mourinho insisted it was not all about him; and on this particular day it was also about Dele Alli.

Alli secured joint top billing with his performance. He did not score but he was influential and there were four Alli goals in his next three matches. Having seemed withdrawn in the late Pochettino period, Alli was resurfacing under Mourinho.

Six and a bit months on, Tottenham host Liverpool on unequal terms

Spurs won the next game after West Ham and the one after that. Each victory, each pre-match press conference, put further distance between the club and Mauricio Pochettino. It felt like the players were responding.

Then came a first defeat and another. There was a a painful 2-0 loss at home to Chelsea and a 1-0 defeat at Southampton. Harry Kane departed the fray there with a hamstring injury and may not be seen again for three to four months. It is an absence to shape a season. Moussa Sissoko is also now injured, he too for months.

There were aspects to admire in the FA Cup draw at Middlesbrough last Sunday – team spirit looked intact without Kane – but after 12 games of José Mourinho it is six wins, two draws and four defeats.

It is better than it had been in the 12 before Mourinho – three wins, four draws and five defeats, including exiting the League Cup at Colchester and extraordinarily losing 7-2 at home to Bayern Munich in the Champions League.

But Tottenham are not flowing and Kane’s hamstring ensures Mourinho can begin to mutter, should he choose to.

He would not be out of order to point to puzzling discrepancies at the club. Liverpool arrive at the new Tottenham Hotspur stadium for the first time this evening. They do so 28 points above Spurs after 21 games. How has this been allowed to happen?

It is bemusing considering the gap between the two clubs was just six points at the same stage last season and that, of course, the two then met as apparent equals in the Champions League final in Madrid.

Back then Tottenham Hotspur FC looked like the very model of tomorrow’s world. They had a brand new stadium – architecturally and commercially impressive – and a training ground to match. In the dugout they had a progressive and coveted manager in Pochettino, while on the pitch were players worthy of the same description – Kane, Son Heung-min and Christian Eriksen to name three.

They had just finished fourth in the Premier League – a point and a place above Arsenal, happily – and reached Europe’s showpiece final. They may have lost it but 2018-19 was a Tottenham success and a marker for the future. Alongside Liverpool and Manchester City, Spurs looked the strongest and most structurally sound club in England.

Six and a bit months on, Tottenham host Liverpool on unequal terms. Jurgen Klopp’s squad has galloped ahead, dealt with the disappointment of losing the league so narrowly and seem certain to be crowned champions of England for the first time since 1990. Klopp deserves all the praise he will receive. Liverpool have recruited better and been better managed.

Some Everton players, who may suffer from delusion, are said to have taken exception to Duncan Ferguson’s dressingroom criticism

Pochettino could scarcely have been praised more at Spurs for his pound-for-pound management, but it turned out the run to the Champions League final was coming at the end of his cycle at the club. It was not a starting point or a fork along the road as it has been with Klopp.

This should be one of Liverpool’s toughest three or four matches of the season but Kane-less Spurs are a weaker proposition.

Perhaps the missed deadlines for the new stadium revealed some mismanagement at the top. Infrastructure investment meant the squad was not refreshed as Pochettino would have wanted.

Go back to Klopp’s first game in charge of Liverpool, which was at White Hart Lane in October 2015 and the names from his first teamsheet of James Milner, Adam Lallana and Divock Origi jump out as being still in contention.

For Tottenham, though, there’s Hugo Lloris, Jan Vertonghen, Toby Alderweireld, Danny Rose, Erik Lamela, Eriksen, Alli and Kane. Harry Winks was on the bench. Yes, it was a developing team, but at some stage over the past year it dipped and required different options.

This is not Mourinho’s doing. But it is his problem. Will Troy Parrott be part of the Kane solution?

Tottenham are fragile but all is not lost. The top three in the table are surely beyond catching but Spurs are six points off fourth-place Chelsea.

Reel in Chelsea and it will be an even greater achievement by Mourinho than steering Manchester United to second place, something for which he does want appreciation.

But imagine if they can’t get to fourth. Imagine if next season is spent in the Europa League and what that does to club planning and budget. In the space of 12 months Spurs will have gone from seeing themselves as challengers to Liverpool and City to worrying if they are starting to resemble late-Wenger Arsenal. And no-one in lilywhite wants that.

Liverpool’s glorious evolution under Jurgen Klopp is affecting more than the clubs supposedly challenging them for the league title. Their good neighbours Everton have got Liverpool under their skin and their head is spinning.

Just three weeks after Carlo Ancelotti arrived at Goodison Park there is already talk of crisis. If it sounds hysterical, that’s because it might be. Had Everton taken one of their first-half chances against the young, unrecognisable Liverpool team Klopp fielded in the FA Cup last Sunday, the talk would have been about how the Italian is steering the Blues into a bright future.

Instead, because those efforts were saved and Liverpool then won 1-0, the reaction was, well, reactionary.

Some Everton players, who may suffer from delusion, are said to have taken exception to Duncan Ferguson’s dressingroom criticism. Or maybe they remembered how much Ferguson enjoyed his little stint in charge.

Quite a lot of it was about him. Either way it’s a mess. A conversation between Ancelotti and Mourinho would be worth overhearing.