Michael Walker: Big Sam is back in town at Everton 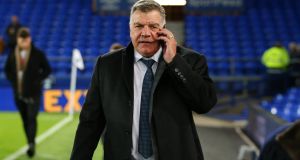 This is a public health warning: some of you should remove any sharp implements nearby because what follows is a defence of Sam Allardyce, football manager. It’s not a popular calling, this. Selling An Phoblacht at a DUP conference might be less fraught.

True blue Evertonians began the week embarrassed by the performance at Southampton and the general mismanagement of their club from the boardroom. Dread kicked in on Monday when it seemed Allardyce, not Marco Silva or some other “progressive” appointment, was about to be made. When confirmation of Allardyce came on Wednesday, widespread squirming and anger replaced that dread.

1 Love Island tribute to Caroline Flack hides the truth
2 Mediterranean diet fuels bacteria that may reduce old-age frailty
3 David Baddiel comes to Ennis to meet a Holocaust denier
4 Fine Gael’s plan for opposition a sign of ‘humility’, says Coveney
5 Gerry Thornley: England primed to show their best against Ireland
6 Dublin council official calls for ban on parents driving children to school
7 Cardiologist saved by paramedics after heart attack at Dublin Airport
8 Fintan O’Toole: Post-election urgency needed as voters run out of patience
9 ‘You run like a rhino – don’t worry they’re fast’
10 I’m happy I went vegetarian. I have no desire to eat meat again
11 Should fans be allowed drink in the stand at sporting events?
12 How can I view my dead brother’s will if I’m not the executor?
13 Fianna Fáil remains the only game in town for Sinn Féin
14 Varadkar says Sinn Féin and Fianna Fáil should form coalition
15 First Look: New wine bar opens alongside Dublin car park
16 Coronavirus: Irish passengers identified on cruise ship in Cambodia
17 ‘We have kids who can’t touch their toes’
18 Kerry’s Chinese sales set for 30% hit from coronavirus
19 What you need to know about pensions
20 Rape victim verbally abused in courtroom after two men are jailed
21 Revealed: Where to find Ireland’s best breakfasts and brunches
22 Paraic O’Donnell: MS is meticulously destroying me. I am being unmade
23 Provisional liquidator appointed to Dublin engineering firm
24 Why do we feel sicker at night?
25 Dancing with the Stars has hit Father Ted levels of farce
26 Ged Nash rules himself out of Labour Party leadership contest
27 Over-reliance on inhalers putting asthma sufferers at risk
28 Bursting of Tesla bubble a case of ‘not if, but when’
29 Man City’s Abu Dhabi owners not the sort to back down over ban
30 Sinn Féin must try and do a deal with other left parties
31 Analyst doubles projection for Tesla shares to $1,200
32 Call for Garda to investigate threats to victim of sexual abuse
33 Forget a grand coalition – here is what the next government will most likely look like
34 Housing is at crisis point – it is time to park ideology and build
35 UL researchers use maths in fight against online child abuse
36 The forgotten Irishwoman who once ruled the New York fashion industry
37 US reiterates opposition to Huawei equipment being used for Irish 5G
38 ‘Exposure doesn’t pay bills’: What artists say about freebie culture
39 Boy Scouts of America seeks bankruptcy amid sex-abuse claims
40 ‘I won’t be behind the door when it comes to telling people my ability’
Real news has value SUBSCRIBE