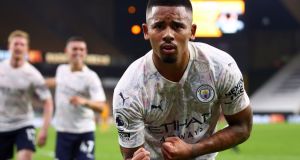 A muscular problem has ruled Gabriel Jesus out for a month, leaving Manchester City without their two first-choice strikers, as Sergio Agüero’s knee injury may require another seven weeks of recovery work. Jesus was injured in Monday’s 3-1 win at Wolves, where he scored City’s third goal, while Agüero has been out since late June.

Pep Guardiola confirmed he will be without the Brazilian when Leicester visit in Saturday but hinted he may call on Liam Delap, the 17-year-old striker who scored an impressive opener in Thursday’s 2-1 Carabao Cup victory against Bournemouth. “Sergio is still not training [with us] and we have Gabriel injured against Wolves [but] we have Liam,” the City manager said.

Delap, the son of former Republic of Ireland international Rory, could start against Leicester. His other option would be to select Raheem Sterling as a false number nine.

“Yeah, of course we have many options – and we [also] have Cole Palmer who can play there as a striker too,” said Guardiola of the 18-year-old who was an unused substitute against Bournemouth. “So we will see.”

Agüero, meanwhile, is still doing only light work. “He’s training a little, running a little bit on the pitch but still he could not make one training session with us, the team,” said Guardiola.

Guardiola brushed aside any concerns City would be inhibited during a busy schedule, despite saying he may have only 13 frontline players for Leicester. City face Burnley in the Carabao Cup on Wednesday before travelling to Leeds on Saturday.

“We have an exceptional squad,” he said. “The injured guys will be back, some earlier than the others, but I am not going to worry for one second about those players who are not there. All the [medical department] are working so they can come back as soon as possible.

“You have to play every competition. We are going to play every game in the right way until the players are coming back and we have more players to come.

“In the end they [players] are not machines and we demand a lot of them, and sometimes the muscles fall down. Hopefully sooner or later they are going to come back, day by day, week by week.”

Meanwhile, Leicester hope to convince Burnley to sell James Tarkowski after making a bid of more than £30 million (€32.8 million) for the centre-back. Although Leicester are trying to sign Wesley Fofana from St-Étienne, they have also long held an interest in Tarkowski and have had one offer knocked back by Burnley. They hope their latest proposal will be enough to land the 28-year-old, who has also been targeted by West Ham.

Burnley have demanded as much as £50 million (€54.7 million) for Tarkowski, who believes that moving to a bigger club will help his chances of regaining a place in the England squad, and have turned down several offers from West Ham. David Sullivan, West Ham’s co-owner, indicated this week that the defender could be too expensive. It is understood the chances of Tarkowski, who is interested in joining Leicester, moving to the London Stadium are slim.

West Ham are also rivalling Leicester for Fofana, regarded as one of the brightest young prospects in Europe. However, Leicester remain favourites to sign him. The club’s manager, Brendan Rodgers, watched the 19-year-old before lockdown and the head of recruitment, Lee Congerton, has scouted him extensively.

However St-Étienne have rebuffed Leicester’s attempts to sign Fofana so far. Claude Puel, the former Leicester manager, would prefer to keep the youngster for another season.

With St-Étienne proving tough to crack, Leicester have revived their interest in Tarkowski. Rodgers needs defensive reinforcements, with his only experienced centre-backs being Jonny Evans, Caglar Soyuncu and Wes Morgan.

Moyes would also like signings in other positions. West Ham are one of the clubs interested in signing the midfielder Ruben Loftus-Cheek on loan from Chelsea. – Guardian

1 Stockdale and Ringrose on board with expansive Irish game plan
2 Bennett girding his loins for impossibly unpredictable Vuelta
3 Lewis Hamilton’s place in the GOAT debate can’t be argued
4 Ken Early: Project Big Picture endangers cushy position of ‘bottom 14’
5 Masks, loads of parking and no people: Covering GAA in a pandemic
Real news has value SUBSCRIBE
Crossword Get access to over 6,000 interactive crosswords