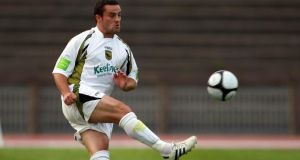 Colm James in action during his days with Sporting Fingal. Photograph: Donall Farmer/Inpho

Longford Town midfielder Colm James has been banned from playing by the FAI for 18 months after having been found guilty of various offences relating to betting or attempting to bet on games.

The 29-year-old, who won the FAI in 2009 with Sporting Fingal, must decide over the coming days whether to appeal the verdict and/or sanction which, if it is left to stand, will almost certainly end his involvement with Longford and might end of his professional career.

James was found to have violated the association’s rules in relation to “bringing the game into disrepute”, “corruption” and “betting/gambling”. The decision comes after what the FAI describes as a “detailed” two-month investigation that involved Uefa, Fifa and the Gardaí.

In its statement, issued last night, the FAI suggested it was a matter for the civil authorities as to whether further proceedings might be taken against James who has also had previous spells with Shelbourne and Bray Wanderers.

“This decision has been made with reference to sporting rules and procedures only,” it said. “Any other action which may be taken is a matter for statutory authorities.”

Longford Town officials could not be contacted last night by The Irish Times.
Two goals from Zlatan Ibrahimovic helped stuttering Sweden to an unconvincing 2-0 win over the Faroe Islands in last night’s Group C World Cup qualifier in Stockholm. Ibrahimovic broke the deadlock in the 35th minute, first playing Mikael Lustig free on the right before meeting the full back’s deflected cross with a thumping left-foot volley.

The captain struck from the penalty spot in the 82nd minute after he was fouled in the box.

Tiger Roll still on track for Aintree after placing fifth in Boyne Hurdle 16:17
Andy Farrell recalls 13 players to Ireland squad ahead of England clash 15:11
Leaving Cert prep forces Beibhinn Parsons out of rest of Six Nations 15:01
Kieren Westwood: ‘I feel obliged to clear my name and defend myself’ 14:01
All in the Game: No Moore medals for Steven Gerrard 12:34

1 Andy Farrell recalls 13 players to Ireland squad ahead of England clash
2 Tipping Point: Eddie Jones’s rhetoric is out of place in a febrile political climate
3 All in the Game: No Moore medals for Steven Gerrard
4 On healing and wild hurling: The re-education of Diarmuid Lyng
5 The Offload: James Ryan chuffed for Leavy and his new puppy
Real news has value SUBSCRIBE
Crossword Get access to over 6,000 interactive crosswords