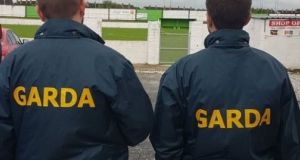 An image tweeted by the Garda on Tuesday after announcing the searches at Limerick FC. Photograph: An Garda Síochána

Mobile phones held by Limerick FC players were seized during a search on Tuesday by gardaí investigating suspected match-fixing in a game the club played against Shelbourne last April.

The operation during a training session by the club at the Hogan Park grounds in Rathbane in Limerick was carried out by the Garda’s National Economic Crime Unit along with local gardaí.

Speaking to The Irish Times, Stephen McGuinness, general secretary of the Professional Footballers’ Association of Ireland (PFAI) said all of the Limerick FC players there “had their phones taken off them”.

There was a further development on Wednesday night when the FAI confirmed it was now investigating unusual betting on Limerick’s recent FAI Cup match with Sligo Rovers .

“The investigation is along similar lines to the one currently underway into the Shelbourne v Limerick First Division fixture in April,” said the FAI, in a statement.

Both investigations were launched following tip-offs from football’s European governing body Uefa: “We have acted on the back of the Uefa report into two Limerick games, against Shelbourne in April and Sligo Rovers last month.

“We are committed to a zero tolerance policy on match fixing in conjunction with Uefa. The FAI, as stated earlier, is also aware of a Garda investigation into match fixing,” said a spokesman for the FAI.

In June, three days of “thorough” interviews of the Limerick-based League of Ireland side’s squad were carried out by the FAI, helped by a former Interpol official.

Players were specifically questioned about one away game, which the Limerick side lost, though no specific allegations were put , said Mr McGuinness, who represented the players there.

Such investigations had happened before, he added: “This is not unprecedented. Bray Wanderers were in the same situation over a year ago. Gardaí called to their ground, but nothing came of that.”

In September 2017, the FAI opened an investigation after Bray Wanderers lost a friendly game against Waterford 5-0 at its Carlisle Grounds. The investigations was later dropped, and no charges were ever brought.

Reports in the Sunday Times last weekend suggested the First Division club’s owner Pat O’Sullivan plans to apply for examinership in the Circuit Court this week, amid club debts of €300,000.

Limerick has had had difficulties paying players wages in the past, though all of its players are now amateur. The FAI confirmed it is in talks with Mr O’Sullivan over the club’s future.

“We are talking to Pat and interested parties about preserving senior soccer in Limerick. The FAI are very mindful of the investment into the club by Pat and his family,” the FAI went on. Mr O’Sullivan could not be reached for comment.

In an undated statement on Limerick FC’s website, the club says it is “an advanced stage of negotiations” with investors, which have been going on since July.

The investors have “firm” plans for the club, it said. “We share their vision, values and core objectives for the club. We had hoped to make a formal announcement this week.

“However some additional time is required for legal documents to be finalised. This is due to one of the main parties involved being away on other business matters.”

Limerick FC use Hogan Park for training, but it is the home of local football club, Hill Celtic. On Tuesday, Gardaí tweeted about a search of “a sports-ground in Limerick in relation to match fixing” above a photograph of two unidentified gardaí at a sports ground.

Hill Celtic’s own training had to be cancelled because of the search, he said. “They prevented people from going in. Hogan Park is owned by a private trust and I’m responsible for it for the last 20-25 years,” he told The Irish Times.

1 Game Changers: Living beyond fear puts Alex Honnold above all others
2 CVC cuts Six Nations offer by half to €165m as talks continue on new deal
3 Could lack of sex force players to break the NBA’s bubble?
4 Jack Charlton era made GAA sit up and realise its greatest strength
5 Lions confirm 2021 schedule for South Africa tour
Real news has value SUBSCRIBE
Crossword Get access to over 6,000 interactive crosswords