Löw to stick with Gomez and Klose 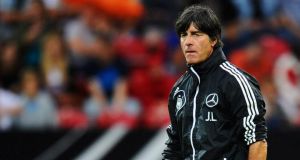 Germany’s Mario Gomez and Miroslav Klose are the first choice strikers as the team enters its final stretch to next year’s World Cup in Brazil, coach Joachim Löw said today.

Both players are plying their trade in Italy with the 35-year-old Klose playing for Lazio and Gomez leaving treble winners Bayern Munich in the close season to join Fiorentina.

“If we don’t have an injury, if there is no major dip in form, Gomez and Klose are our first choice, our first priority,” Löw said ahead of the friendly against Paraguay in Kaiserslautern.

“There are also players like Stefan Kiessling or Max Kruse. So I think we have alternatives but the development seems to go towards deploying also other players like Mario Götze in that position. Quick, speedy players who can drag a physically bigger defender out of position.”

Veteran Klose, who made his first of 127 appearances in 2001 and needs one more goal to equal Gerd Müller’s German record of 68 international goals, and Gomez will both earn playing time against the South Americans tomorrow night.

“I will wait until this evening’s training session before deciding,” Löw said.

“Both are coming in from their pre-season preparation with their clubs. In Italy it is a bit different. Long training camps of up to three weeks and a lot of work on stamina. I think that maybe each will play a half or at least that both will play.”

It is still unclear, however, if midfielders Ilkay Gündogan and Marco Reus can recover from a back injury and fever respectively in time for tomorrow’s game.

Löw said both would try to train this evening and any decisions would be taken afterwards.

Germany are top of Group C in their World Cup qualifying campaign with 16 points from six games, five ahead of Austria whom they play on September 6th before travelling to the Faroe Islands four days later. Sweden and the Republic of Ireland also have 11 points.

1 Gordon D’Arcy: Losing such a big game shines a very harsh light on certain players
2 How Dundalk’s opponents Sheriff started on wrong side of the law
3 The Offload: Saracens prove Pro14 is not fit for purpose
4 Five French rugby officials released after over 24 hours of questioning
5 Meet Liverpool’s throw-in coach who aims to ‘change football’
Real news has value SUBSCRIBE
Crossword Get access to over 6,000 interactive crosswords