Klopp shortlisted for inaugural European Coach of the Year award 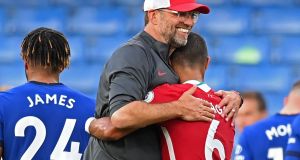 Liverpool’s Jurgen Klopp is one of three Germans shortlisted for Uefa’s inaugural European Coach of the Year award. The 53 year-old followed up on his Champions League success at the Anfield club last year, by masterminding its 19th top flight title and first in 30 years.

Even that might not be quite enough to for him to lift the new award however, for Klopp faces tough competition in the form of Hans-Dieter Flick who utterly transformed the fortunes of Bayern Much after having been promoted from assistant to take charge of the team at the start of November.

In the end, the club won the Bundesliga by 13 points from rivals Borussia Dortmund and swept through the knockout stages of the Champions League before beating PSG in the final to secure a sixth European title.

The shortlist is completed by Julian Naglesman who, at just 33, is considered a major rising star and is recognised here for getting RB Leipzig to the Champions League semi-finals.

In women’s football, Lluís Cortes of Barcelona, Wolfsburg’s Stephan Lerch and Jean-Luc Vasseur who coached Lyon to another Champions League title make up the shortlist.

In the players’ category neither Lionel Messi nor Cristiano Ronaldo make the shortlist for an award they have dominated between them since its launch in its present form almost a decade ago.

The pair have won it five times between them and Ronaldo has never before failed to make the final three. This year, though, the list is comprised of Bayern Munich striker Robert Lewandowski, Kevin De Bruyne of Manchester City and Bayern’s German international goalkeeper, Manuel Neuer, who finished second to Ronaldo in 2014.

The now 34 year-old enjoyed another tremendous campaign, while De Bruyne’s form earned him the PFA Player of the Year award in England, but Polish striker Lewandowski’s 34 Bundesliga and 15 Champions League goals would suggest he is the favourite for the Uefa award which is voted on by coaches of all the clubs that make the group stages of the season’s club competitions along with one journalist from each of Uefa’s 55 member countries.

The winners will be announced by Uefa next Thursday, October 1st.