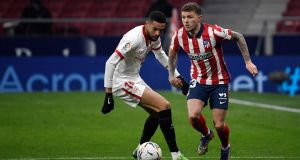 Kieran Trippier could end up missing no further matches for Atlético Madrid – and be clear to play for England in March – after the Football Association failed in an attempt to revise the dates of his punishment for breaches of its betting regulations.

The 30-year-old full-back was banned by the governing body for 10 weeks after an independent panel found that he had encouraged friends to bet on his transfer from Tottenham to Atlético in the summer of 2019.

Fifa confirmed on December 23rd that the FA’s punishment would apply worldwide, meaning Trippier faced being unable to train or play for Atlético until February 28th – ruling him out of at least 13 matches.

Trippier accepted the punishment and resolved to move on rather than appeal. But Atlético did appeal to Fifa about the worldwide aspect of the sanction, as the FA does not have jurisdiction in Spain, and it prompted a U-turn; Fifa ruled that Trippier could resume playing in Spain pending the result of his club’s appeal, the timeframe of which is unclear. Trippier had missed two La Liga games and one Copa del Rey tie but he was back for Tuesday’s league victory over Sevilla.

The FA applied to the independent panel, asking it to delay the enforcement of the ban until the result of Atlético’s appeal to Fifa was known or Trippier returned to England and came back under their jurisdiction – whichever came first. It was announced on Thursday that the panel had rejected the request, largely because to have upheld it, in its view, would have unfairly plunged Trippier into an unspecified period of uncertainty.

What it means is that as each week goes by without a decision from the Fifa appeals’ body and with Trippier continuing to play for Atlético, his punishment is effectively reduced – much to the FA’s frustration. Furthermore, Atlético are understood to be prepared to take their appeal to the court of arbitration for sport (Cas) if the Fifa decision were to go against them. This would potentially buy them even more time with Trippier in their team.

There does remain the possibility that Fifa or Cas could uphold the panel’s original decision and order Trippier to serve the full length of the ban – minus the small amount of it that he has already served. This, however, would fly in the face of the reasoning that the panel have just given to the FA for not revising the dates of the sanction.

Trippier was due to miss the first leg of Atlético’s Champions League last-16 tie at home to Chelsea on February 23rd. He could now play in it if Atlético’s appeals were to drag on. England’s next set of fixtures are the 2022 World Cup qualifiers in late March against San Marino, Albania and Poland. In all likelihood, he will be in the clear for them.

The panel said in its written reasons: “The effect of the revisions which the FA seek is to postpone the commencement of KT’s suspension to an unknown date which may be no more than some days away but which may, alternatively, be significantly into the future.

“This has the potential to cause significant stress and anxiety to KT. He was entitled to think until 2 January 2021 that these long drawn-out proceedings had been finalised and that as from the end of February 2021 he could begin a new chapter.”

The panel noted Trippier had argued that the FA’s ban had hurt him by denying him the possibility of a January transfer back to the Premier League, even if it is understood that he is not looking to move.

“There is no reason to suppose that he is wrong when he asserts that the suspension is impeding his prospects of being transferred to an English club during the current transfer window very substantially,” the panel said. “We accept that the suspension is probably having a deleterious effect upon KT’s transfer prospects. That is damaging to him and his family in the way that he describes.”

The panel also called upon the FA to engage “vigorously” with Fifa in an attempt to expedite the outcome of the appeal. It added: “There is a very real benefit to football worldwide in resolving as quickly possible whether it is open to clubs to intervene as AM [ATLÉTICO]has done in this case in the absence of its player’s consent and, indeed, against his wishes when such intervention might be viewed as frustrating the outcome of national disciplinary processes and the ability of Fifa to give effect to those outcomes worldwide.” - Guardian