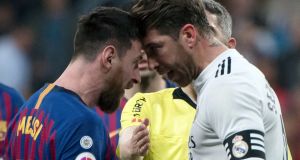 Last week, in a video interview with Copa90, Jurgen Klopp allowed himself a little jibe at the expense of Everton: “We have 330 million people who love Liverpool, fans all over the world, they will watch [the Merseyside derby] - and a few Evertonians will watch as well...”

“That makes about 6.7 billion Everton fans who’ll be watching then” was the gist of a common riposte, reflecting the internet’s broad consensus that nobody apart from Liverpool fans wants to see Liverpool win the league.

8 Girl left scarred after falling into brambles at school secures settlement of €90,000

9 Ken Early: Klopp all at sea as Liverpool continue to flounder

11 Pandemic savings: How some people have saved thousands by working from home

19 Covid-19: Mandatory hotel quarantine system could be running in a week

22 Benefits of sport far outweigh the Covid risks so why are kids still not playing?

29 Jacob Stockdale back in Ireland squad ahead of Scotland clash

30 Eirgrid proposals to include €2bn power line around Irish coast

32 Do young people really need to go back into the office?

35 Colin Farrell: ‘After 20 years of drinking the way I drank, the sober world is pretty scary’

36 International Women’s Day: No more excuses on gender and power

40 Smother: This is what an Agatha Christie-themed Glenroe looks like