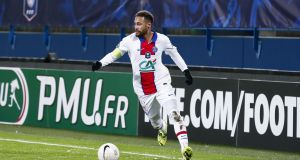 Neymar’s transfer from Barcelona to PSG has had a seismic effect on the Catalan club. Photo: Catherine Steenkeste/Getty Images

Tuesday night should have seen Neymar back at Camp Nou for the first time since he left Barcelona four summers ago, but last week he got injured just in time to miss the Champions League knockout stages, as is tradition.

He’ll be missed, but even if he had been fit it’s impossible to imagine tomorrow’s match approaching the epic drama of the last meeting of these sides - the famous 6-1 win for Barcelona which was surely the most consequential Champions League match of the century.

21 Divers steal beer being aged by sunken ship off Argentina

22 ‘We should have done better’: Cillian de Gascun, Paul Reid and Stephen Donnelly look back

27 Steve McQueen: ‘Calling me a political director is like calling me a male director’

36 Johnny Watterson: I do not buy the apology around paedophile John McClean