Despite Mourinho’s protestations, City’s clear superiority is now plain for all to see 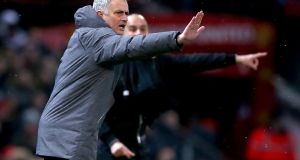 A few days ago the former Premier League referee Mark Clattenburg caused a minor sensation by telling NBC’s Men In Blazers podcast that he had intentionally let a number of red card offences slide in the famous game between Chelsea and Spurs that saw Leicester win the title in 2016.

“I went in with a game plan that I didn’t want Tottenham Hotspur blaming Mark Clattenburg that they were gonna lose the title. It should’ve been three red cards to Tottenham; I allowed them to self-destruct so all the media, all the people in the world went, ‘Tottenham lost the title’. If I sent 3 players off from Tottenham, what’s the headlines? ‘Clattenburg lost Tottenham the title',” he revealed.

1 Bodies of mother and two children removed from south Dublin house
2 Cork shootings: Gardaí believe older son was shot multiple times
3 Aldi, Lidl bow to pressure to ban non-essential ‘middle aisle’ sales
4 Cork shootings: Gardaí find lengthy apparent suicide note on one of the dead men
5 Michael Harding: Three reasons you’ll never see a cat in Donegal
6 Mazda’s first EV requires mental recalibration
7 ‘I actually didn’t know Ireland existed. But I read about it and knew it was perfect for me’
8 Medical gaslighting: The women not listened to or viewed as overdramatising or catastrophising
9 Michael McDowell: We must check if this Covid-19 lockdown is really necessary
10 Young homeless mother may have been dead in tent for a number of days
11 Second-level teachers vote for industrial action over school safety and pay
12 Six Nations - France v Ireland: Kick-off time, TV details, permutations, team news and more
13 Two hundred Irish retailers for all your online Christmas shopping
14 Ciara Kelly: I was pregnant, unmarried, a junior doctor and I got old-school comments
15 Kanturk farm shootings: A timeline
16 Coronavirus: Six deaths and 675 further cases reported in Republic
17 Mother and Baby Home survivors can seek access to personal records
18 ‘We must avoid a tragedy’: European Council head on Covid-19 mistakes
19 Pre-flight Covid tests possible ‘within days’ if given go-ahead – airports
20 Son (23) who died in suspected Cork murder-suicide was due to graduate
21 Johnny Ronan loses out on €315m Dublin docklands deal
22 Johnson’s Brexit Bill set to be blocked by House of Lords
23 ‘My boss gives me information that is misleading . . . I am obviously being bullied’
24 France resumes lockdown in face of ‘harder, more lethal’ second wave
25 Fast Donnybrook flip with all the work done for €625k
26 Back to brack: An easy Halloween bake
27 City businesses can’t afford to wait for a Covid-19 vaccine
28 Coronavirus: Europe paying ‘high price’ for relaxing too quickly
29 From the past to modernity: images of Ireland transforming
30 The Irish Times view on Brexit talks: endgame in sight?
31 Cork suspected murder-suicide may have been over disputed will
32 Man jailed for role in ‘horrendous’ arson attack that left victim without ears
33 Róisín Ingle: Five ways to find joy in a pandemic. Only one of them is illegal
34 Ryanair and Aer Lingus to cut further flights from regional airports
35 Nphet ‘not anticipating’ advising against schools reopening after midterm
36 Author Julia O’Faolain has died, aged 88
37 Biden and Trump will both head to Florida as election campaign enters final stretch
38 Gordon D'Arcy: Ireland must go after victory by frightening France into mistakes
39 School closures on the agenda following ASTI vote
40 Deaths of father and sons may have been over disputed inheritance
Real news has value SUBSCRIBE