Ken Early: Mkhitaryan for Sánchez swap is ideal for all parties 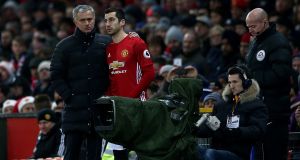 You could tell from quite early on that José Mourinho was struggling to see the point of Henrikh Mkhitaryan. The Armenian had arrived as one of a set of three Mino Raiola players in the summer of 2016, but while Mourinho obviously counted on Zlatan Ibrahimovic and Paul Pogba, he never seemed to know what to do with Mkhitaryan. There were times during that first, fitful season when it looked as though the Armenian had only been signed to grease the wheels of the other two, more significant transfers.

Mkhitaryan’s United career stalled at the very beginning, as he was subbed off at half-time in the early league defeat to Manchester City. He would not start again in the league for nearly three months. When he went to Mourinho to ask why he wasn’t being considered, he was told in vague terms that he did not defend enough.

Eventually he worked his way back into the Premier League team thanks to good performances in the Europa League, where Mourinho used the squad players. When Mkhitaryan scored a classy winner against Tottenham in December, Mourinho was hailed for the clever man-management that had inspired such an improvement from the erratic new signing: if Mkhitaryan didn’t already realise how things worked at Mourinho’s clubs, he was learning fast.

He would score United’s last goal of the 2017 season as they won the Europa League against Ajax in Stockholm, yet he never really seemed to win Mourinho’s trust. In his 39 Premier League appearances for United over two seasons, he completed 90 minutes on just six occasions.

His last league game at Old Trafford was a disastrous showing against Southampton, when Mourinho put him out on the left wing with an apparent brief to go down the outside and sling in left-footed crosses for Romelu Lukaku and then for Marcus Rashford. He played so pitifully that when he was substituted the United fans booed him off the field.

So where did it go wrong for Mkhitaryan? His mistake was to join the wrong kind of team. Under Thomas Tuchel at Dortmund, he had been part of a team that played fast, organised, collectivist attacking football. Mkhitaryan usually played on the right of a mobile front three, with Marco Reus and Pierre-Emerick Aubameyang as his partners up front and Lukasz Piszczek in support as an overlapping full-back. His numbers for that season are ridiculous: 23 goals and 32 assists in 52 matches.

When he moved to Manchester he found himself in a completely different type of team. Mourinho’s side played slower, sat deeper, and did not attack with as many players. Instead of a starting position on the wing, with license to come inside and a selection of fast attackers to exchange passes with, Mkhitaryan was usually stationed in the centre, ahead of two banks of four and just behind Ibrahimovic, Mourinho’s slow-moving siege engine. His job was to be the “creative” joker in the pack, to sprinkle the magic dust that would bring the rigid structures of this team to life. But what had happened at Dortmund was never magic – it was teamwork. You can’t expect a combination player like Mkhitaryan to do it all by himself.

An individualist like Alexis Sánchez, well, that’s a different story. Sánchez is just the sort of player you could imagine thriving where Mkhitaryan withered. The fact that he turned down the chance to join Manchester City means that some have criticised him for choosing money ahead of trophies. True, it’s unlikely that Sánchez would have chosen United if they had offered less money than City did. Yet when you think about the player Sánchez is, United really does look like the wiser choice.

It’s not just that United will be so much more grateful to Sánchez for joining them than City would have been. It’s that Sánchez is a spontaneous, improvisational player with a little bit of a hero complex. These characteristics are a much better fit for a José Mourinho team, where the attacking leaders are left to invent the attacking play by themselves, than for a Guardiola team, where every individual is expected to stick to his role within a carefully choreographed attacking system.

It’s very important for a player to join a team that is set up to make use of his particular talents, as Mkhitaryan could tell him.

As to whether Mkhitaryan is joining such a team at Arsenal, that’s doubtful. Right now Arsenal are a kind of cargo-cult Dortmund: they display some of the superficial characteristics of modern-system football without any of the complicated internal circuitry that makes it work.

But the fact that Arsenal’s recruitment is now being driven by Sven Mislintat, recently poached from Dortmund, augurs well for the future. And Mkhitaryan will be playing with Mesut Özil and most likely his old Dortmund team-mate Aubameyang, so there will be players there who understand what to do, even if the manager doesn’t.

There has been talk in Germany that Aubameyang is trouble, that he is toxic to the dressing room spirit at Dortmund and so on. These are just the usual sort of reports that often come out when a club wants to make its supporters feel less angry about the loss of a popular player that the club has decided to sell.

The thing to remember about Aubameyang is that he beat Robert Lewandowski to the top scorer award in the Bundesliga last season. You don’t achieve that without being a serious professional at the absolute top of your game. If Arsenal can complete the signing of Aubameyang to go with Mkhitaryan, it will be the best transfer window the club has had in years.