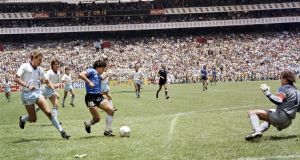 Maradona runs past England defender Terry Butcher before dribbling past goalkeeper Peter Shilton and scoring the goal of the century, during the World Cup quarterfinal between Argentina and England on June 22nd, 1986 in Mexico City. Photograph: Getty Images

The news on Wednesday that Diego Maradona had died at the age of 60 prompted an immediate and overwhelming paroxysm of nostalgia. 2020 has already been a year of more retro football than anyone had bargained for, but still it only ever takes a minute or two to fall back under the spell of the young and beautiful Maradona, darting past defenders in the Mexican sunshine or whacking one of those insane parabolic volleys over the head of some stupefied Italian goalkeeper.

I first saw many of these images as a child in the late 1980s and to me they have lost none of their glory and power. Maybe future generations will look at the same pictures and think to themselves the sort of patronising things that people think when they look at old sports. A lot of these guys look a bit too thin – or too fat. Was the game really once played this slowly? Wait a minute – is that guy smoking?

4 Fintan O’Toole: We had zero Covid and we blew it

6 Spring clean: 13 ways to spruce up your home – with or without a tradesperson

7 ‘We should have done better’: Cillian de Gascun, Paul Reid and Stephen Donnelly look back

11 Wood burning stoves: The inconvenient truth about the homely heater

16 Kate Winslet: ‘I shouldn’t have worked with Woody. I’ll always grapple with that regret’

20 Paul Flynn: Three satisfyingly simple dishes that anyone can cook

21 Jennifer O’Connell: The Government doesn’t trust us and it’s mutual

22 Michael Walker: Why Marcelo Bielsa is manager of the season so far

25 Six Nations: Time for Ireland to deliver in style against Italy

31 Covid-19: Self-isolation rules to be eased for healthcare workers

32 Blackrock cottage beside a babbling brook and parkland for €725k

38 Social Democrats to explore options for growth in Northern Ireland