Ken Early: Deportivo show PSG how to close out against Barça 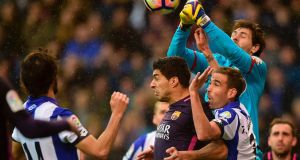 The last few minutes of Barcelona’s 2-1 defeat to Deportivo la Coruña unfolded according to an eternal pattern. Protecting the lead they had taken when Alex Bergantiños outjumped Jordi Alba at the back post, Deportivo formed a phalanx in their own penalty area, leaving virtually no space behind or between their defenders. Barcelona’s only sight of their goal in the last few minutes came from a free-kick that Lionel Messi missed. You couldn’t help but wonder - why couldn’t PSG have done this?

Last week, L’Equipe reported that after that historic 6-1 defeat in the second leg, PSG’s club channel had cancelled a documentary they had been making around the Barcelona tie. This is terrible news both for sports film-making and for PSG, who apparently can’t face the process of learning from their mistakes.

In the 90th minute at Camp Nou, PSG were still winning the tie unless they conceded two more goals. They should have been packed around their box, but for some reason they were trying to defend a line 30 metres from their goal.

That meant that when Lionel Messi got the ball in the centre circle, he could scarcely believe how easy PSG were making it for him. It was simple for him to chip the ball in behind their back line for Suarez to chase. Suarez in turn had space to build up speed on his run into the box and sprawl under the suggestion of a challenge by Marquinhos to win Barcelona’s second penalty of the night.

PSG’s players criticised the referee for favouring Barcelona, but they have played Barcelona enough times over the last few years to know that the marginal calls usually go the home side’s way at the Nou Camp. PSG will have to deal with the fact that if they had contrived to concede fewer than six goals, they would have gone through.

Barcelona’s comeback astonished the world, but the more you think about it, the more you had to conclude that the two results - 4-0 and 6-1 - said bad things about both teams. Barcelona have better attacking players, so they ultimately did a better job of exposing their opponent’s weaknesses.

Perhaps the strangest thing about the match is that Barcelona scored six without playing all that well. They started fast and dominated the first half, but once they conceded the goal to Edinson Cavani the game was dead for the next 25 minutes. Barcelona were going through the motions until Neymar struck that perfect free kick in the 88th minute.

There was an undeniably freakish element to most of the Barcelona goals. The first was a scuffle, with Luis Suarez capitalising on confusion between Thiago Silva and Marco Verratti, who let the ball bounce just in front of their own six-yard box. The second was a weird own-goal, the third a penalty that came after the unfortunate Meunier inadvertently tripped Neymar with his head. The fourth was a free-kick and the fifth another penalty. None of the five goals had from the sort of sweeping move for which Barcelona are famous.

Even the sixth goal started with another free-kick that had been won by Barcelona’s goalkeeper 10 metres inside the Paris half – another weird event – but the feint and pass by Neymar to set up the goal was creative play of the highest order. It’s plain that Barcelona got incredibly lucky, but it was quality that made the difference in the end. Even with all that luck they could not have won if Neymar was not a great player.

He also made a point about the Barcelona coach, Luis Enrique: “It just sums it up that two weeks ago he was an idiot and everyone said you have to leave, so he said, ‘Okay, I go.’ Today he is a hero. That sums up the job.”

Wenger was right that Enrique had looked like an idiot after the first PSG match. He had at least used the time before the second one to come up with a solution to the shortcomings they showed in Paris. After an unconvincing win in the next league match against Leganés, he dropped his young full-backs, Sergi Roberto and Lucas Digne, and changed to a 3-4-3 formation in the hope of re-establishing some control over the centre of the field.

But the new system, which features Lionel Messi playing centrally off the striker, has some shortcomings of its own – notably, that it’s harder to get the ball to Messi in the sort of areas where he can do real damage. There are too many players ahead of him constricting his space. This was more evident against Deportivo than against PSG, but Barcelona will be lucky to come up against another team that self-destructs as badly as the Parisians did. They will have to play much better than that to win the Champions League.

1 Cam Newton broke the mould: Can his flame be rekindled at the Patriots?
2 Pete Sampras: The forgotten great with the best serve in the business
3 The Game Changers: Vincent O’Brien, a pioneer who took Irish racing to the world
4 Tipping Point: DeChambeau’s transformation raises questions, but who will ask them?
5 The unsolved mystery of Goran Ivanisevic’s stunning Wimbledon win
Real news has value SUBSCRIBE
Crossword Get access to over 6,000 interactive crosswords