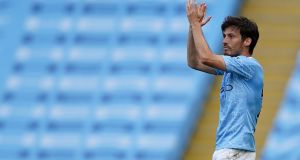 Manchester City’s Spanish midfielder David Silva leaves the field on his final appearance for the club during the Premier League match against Norwich City at the Etihad Stadium on Sunday. Photograph: Dave Thompson/AFP via Getty Images

David Silva played his last Premier League game with no Manchester City fans present to give him the big send-off he deserved. But then, Silva’s most passionate admirers have long been located not on the terraces, but in the studio. As he departs it should be at least some consolation to Silva to know that he is the most popular-ever player among the Premier League’s top TV pundits.

When Jamie Carragher wrote in the Daily Telegraph that “Silva is City’s finest-ever player”, he was being relatively restrained in his praise. Silva is commonly lauded as the best player not just for Manchester City, but of the entire Premier League era. For example Alan Shearer, writing earlier this year in the Sun: “When we are talking about the best foreign players to grace the Premier League, then David Silva is one of the best – if not the best.” Thierry Henry preferred to qualify by position rather than nationality in December 2017: “He’s the best creative midfielder we’ve seen in this league.” Graeme Souness in 2019: “There’s an argument for him being the best Premier League player ever.”