José Mourinho forgot happiness need not be a weakness 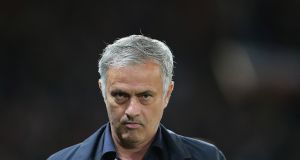 José Mourinho looked unimpressed. He had been handed a copy of Matt Busby’s 1973 autobiography, Soccer at the Top, with the last page open. There Busby had summarised a lifetime in professional football in surprisingly emotional language.

Busby had known hardship – Manchester United’s offices were in a company near Old Trafford called Cornbrook Cold Storage when he arrived as manager after the war. He, of course, also knew tragedy.

But – without being too hippy daydream about it – Busby also knew love. As he says, a lesson football had taught him was to “respond to warmth with warmth” and “in management, be not remote, but give respect and, even more important, give affection if you expect to receive it.

“Without affection we might win something today, but in the end will have gained nothing.”

It sounds like a sermon and those crossed by Busby down the years will have bristled. But a valid point about warmth and encouragement had been made by a master of his trade. At the very least, it is worth due consideration.

On reading it, Mourinho’s lip did not exactly curl, but nor did he smile at a truth recognised.

This was three years ago, just as his second coming at Chelsea was about to turn into his second going. No one knew then that Mourinho would be a successor to Busby. That was a coincidence. But the topic of warmth, that was not.

It was raised because for all the gold and the glory, the 52-year-old Portuguese seemed strangely unfulfilled. He looked cold.

Maybe grumpiness was part of his managerial act – he wouldn’t be the first – but beneath the surface, there also appeared to be a seam of dissatisfaction. Why was this? Why had the warmth he inspired in the likes of Frank Lampard and Didier Drogba in his first calling at Stamford Bridge given way to allegations of betrayal in the second? What had changed in Mourinho?

His answer was that the game had changed, not him.

“I’m a lonely guy in this modern world of football.”

Part of the erosion

As we sat in the unlikely setting of Harrods, Mourinho insisted, however, that despite his professional loneliness, he did receive enough of Busby’s key word, “affection”.

Maybe he was correct. Maybe the coarsening of football debate had left him askance. Maybe the whole “winning mentality” of coaching, allied to commercialism, had eroded the broad, softer culture of the game he had known as a boy. Sportsmanship is not a word we hear very often.

Then again, maybe he was part of this erosion. Maybe the success of Mourinho’s narrow focus on victory at all costs had shaped the football environment. To Mourinho, victory was validation. The game was won. The pitch was scorched. Next.

There seemed to be no vision of the sport beyond the match his team was playing.

But he had a winning smirk back then at Porto and Chelsea, and people smirked along, saw the sporting and economic sense in his knowing cynicism. At Inter Milan he embellished this record, furthered his CV. Every time he won a trophy, he bought himself a new watch to mark the time of his triumph. There was an intense fascination with himself.

Remember Mourinho’s soliloquy-rant at Southampton shortly before the second Chelsea departure? “Sadness brings sadness,” he said, “bad results attract bad results.” Was he getting the message?

Of his forthcoming dismissal, he added: “Bad results, and the manager is guilty. I think this is a moment for everybody to assume responsibilities.”

He was correct on the latter. This failure at Manchester United is a collective one. It is, for once, not all about José Mourinho.

Yet he cannot ignore the notion that the “palpable discord” Chelsea referred to – publicly – when Mourinho left in December 2015 followed him out the door at Old Trafford.

Some affection – or gratitude, or respect – has flowed from certain United players since Monday. But some did not.

Ian McEwan minted the term “government by bonfire” for Trump’s America and in late-era Chelsea and United it felt applicable to Mourinho.

What is so striking is United’s reaction: they aim to extinguish this with affection, a smile. In Ole Gunnar Solskjaer, they have appointed a man serenaded to the tune of You Are My Sunshine.

They say you make your own weather, and United have gone from brooding cold to happy warmth. It appears knee-jerk, risky – from Mourinho’s scowl to Solskjaer’s smile – but perhaps United have considered the two managers at their greatest rivals, Jürgen Klopp and Pep Guardiola, and reflected that both are touchy-feely with people as well as tactics. Perhaps United sense the culture of management has been moved on and that warmth and affection are not to be left in a corner. Happiness is not weakness.

Klopp is mocked by a section of the United fan base for his hugging persona, his smile. But it is part of what is making Liverpool work.

Guardiola – a serial winner of no little intensity – was asked in October about perceptions of himself and replied: “When people ask what I want, it is to be loved.”

It is the human factor and, for a while, it was crushed under the wheels of Mourinho’s winning machines. Even Roy Keane, who entered management at Sunderland while Mourinho was is his pomp at Stamford Bridge, and for whom the word “winning” is sacrosanct, took a step back in his second autobiography: “A key to management, I think now, is to try and maintain that childlike love of the game, that innocence – innocence, not naivety.”

Professional football is about results, of course it is. But it is also about people and so much more. That childlike love Keane mentioned is what so many fans feel, or want to feel, as they walk to whatever ground on a Saturday. It is why United fans still sing: “Every single one of us loves Alex Ferguson. ” It is called affection.

José Mourinho might laugh all this off as poetry. But it was a lesson Matt Busby was prepared to learn. He gave a lecture to Uefa in 1971, in part about the “disease of negative football”. It ended with the words: “We must bring a smile back on football’s face.”

1 America at Large: On Long Island, longing for a return to our field of dreams
2 Woods and Mickelson to play coronavirus relief match – reports
3 ‘This is sick’ - seventh-tier Swedish club cancels friendly after betting mayhem
4 Karen Robinson Walton: I am looking at him. I say ‘Benjamin, what have we done?’
5 Twist of fate led Claire Molloy to a rugby career with Ireland
Real news has value SUBSCRIBE
Crossword Get access to over 6,000 interactive crosswords