He's been named as tournament ambassador for Euro U17 Championships 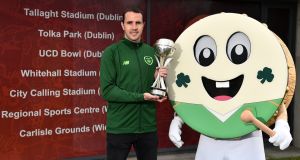 Former Republic of Ireland international John O’Shea has been named as tournament ambassador for the upcoming UEFA Under-17 European Championship that takes place in Ireland from May 3rd to 19th. Photograph: Seb Daly/Sportsfile

With a little over two months to go to the start of the 16-team event which will be hosted in Dublin, Bray, Longford and Waterford, the FAI unveiled John O’Shea as a tournament ambassador for the European Under-17 Championships on Monday.

The former senior international was a member of the side that won the title in 1998 when, he says, his performances helped to clinch him a move to Manchester United.

“Personally, I definitely took a lot from it. The countries we were playing against, with their rich pedigree, and the fact that we could compete and win it,” said O’Shea.

“It was a huge boost to everyone but I was just about to sign for Celtic until United were able to watch me in those games. It was a contributing factor in turning my career in that direction so I have a lot to thank it for.”

The draw for the finals takes place on April 5th and tickets for games are already on sale.

O’Shea, now 37, suggests he has not made up his mind on whether to keep playing beyond the end of his current deal with Reading but he says he is enjoying watching the way his former United team-mate Ole Gunnar Solskjær has transformed the fortunes of the club.

United have their work cut out in the second leg of their Champions League tie with PSG, he admits, but he does not feel that takes away from the way the Norwegian has re-energised the players.

“It’s not just that they’ve gone; ‘Ah, sure Ollie’s a great fella, let’s go run around a bit faster and tackle a bit harder for him’.

“The players seem to be pushing each other into proper performances and maintaining it and that’s the key to it; maintaining, and I think Ollie has been key to that.”