Jürgen Klopp frustrated as Liverpool fluff their lines in Germany

Reds will look to see off Augsburg at Anfield next week 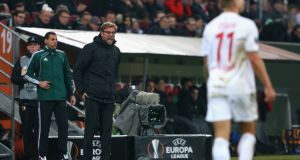 Liverpool manager Jürgen Klopp shouts from the sideline during the Europa League round of 32 first leg match against FC Augsburg at WWK-Arena. Photograph: Alexander Hassenstein/Bongarts/Getty Images

“Klopp Is Coming Home” read the front page headline on the Augsburger Allgemeine but the celebrated return of Liverpool’s German manager was not an occasion to cherish. Jürgen Klopp’s team were held to a tame goalless draw in Bavaria as Augsburg forgot their domestic problems to keep their Europa League ambitions alive.

Liverpool produced a much improved second-half display but also survived a late scare when Ji Dong-won struck the outside of Simon Mignolet’s post with his first touch. The absence of an away goal will unsettle Klopp as much as his team’s laboured first-half performance and now the need to seal victory at Anfield next Thursday just three days before Capital One Cup final against Manchester City.

Klopp had labelled the tie “the biggest game in Augsburg’s history”, taking his cue from his opposite number, Markus Weinzierl, who claimed Liverpool’s visit was his club’s chance to announce themselves on the international stage.

The billing may have been an attempt to deflect attention elsewhere on his first appearance back in Germany as Liverpool manager, but it also served as a warning to his players to expect “a fight” from an opponent languishing one point above the Bundesliga relegation zone. The pre-match talk bore no relation to what unfolded on the pitch, however, as unforced errors and careless distribution from both sides undermined the managerial hype in the opening 45 minutes.

The Liverpool manager named an unchanged team for the first time in his 31 matches in charge, the desire for greater consistency after Sunday’s 6-0 mauling of Aston Villa and to settle the contest with the Capital One Cup final on the horizon uppermost in his thoughts. He would therefore have had concerns over a first-half display from the visitors that lacked composure on the ball or any sign of the “rhythm” that Klopp feels has been lacking from his side.

With the stadium vibrant, and welcoming its team on to the field to the strains of ‘Land of Hope and Glory’, the burly centre forward Raul Bobadilla almost latched on to a long ball over the Liverpool defence inside the opening minute. The sloppy tone was set moments later when Mamadou Sakho directed a routine defensive clearance straight to Bobadilla unmarked on the edge of the area. His volley struck the ground before looping over Mignolet and on to the roof of Liverpool’s net, much to the Paraguay striker’s disgust. His night would not ignite.

The forward suffered an early hamstring injury and, despite playing on for 15 minutes in obvious discomfort, had to give in to the inevitable after 23 minutes. Weinzierl’s approach was centred around Bobadilla’s physical presence and his departure prompted a more patient display from the home side. The striker’s replacement, Caiuby, created the clearest opportunity of a dour first half when releasing Alexander Esswein behind the Liverpool defence on the stroke of half-time. Esswein cut back inside Kolo Toure but Mignolet was out quick to close the angles and block the shot.

Liverpool did have their moments before the interval without seriously troubling Marwin Hitz in the Augsburg goal. The visitors’ first chance was gifted to them when Markus Feulner sent a wayward pass straight to Roberto Firmino, who broke into the penalty area but sent a tame shot straight at Hitz. The goalkeeper also saved comfortably from Daniel Sturridge’s header and when Ragnar Klavan’s tackle resulted in the ball rebounding off Sturridge and heading towards goal.

Liverpool were far too static in the final third, making life comfortable for Augsburg’s defenders as a consequence, but as their movement improved in the second half so, predictably enough, did their threat. The spectacle improved considerably too. Sturridge should have given Klopp’s team the lead when James Milner and Firmino carved open the home defence down Liverpool’s right and the former drilled an inviting pass across the face of goal. The striker opened his body to convert but failed to get enough on the ball and miscued badly wide of the far post.

Augsburg were again exposed on their left when Sturridge released Nathaniel Clyne to the byline. The defender’s cross was destined for Philippe Coutinho arriving at the near post only for Paul Verhaegh, having tracked the Brazilian’s run, to make a vital interception. Liverpool went close for a third time when the Bundesliga side made a hash of clearing Alberto Moreno’s free-kick into the heart of their penalty area. Caiuby struck his clearance against Verhaegh and the ball rebounded into the grateful grasp of Hitz on the line.

Moreno almost deceived the Augsburg goalkeeper with a swerving shot from distance while the home side’s chances were limited by contrast. That said, Kostas Stafylidis should have edged them ahead when he arrived unmarked into the area to meet Esswein’s inviting cross from the right only to direct a wayward shot against Caiuby and out.

1 Ireland Slam England at the Gardens to open up Grand ambitions
2 ‘Manchester United are lucky to have you’: Klopp responds to Donegal schoolboy’s letter
3 Eddie Jones: back three will deal with Irish aerial threat
4 David Brady says he's witnessed illegal payments of GAA managers
5 Solskjær backs Martial to get 20 goals for Manchester United for first time
Real news has value SUBSCRIBE
Crossword Get access to over 6,000 interactive crosswords