US seeks extradition of Fifa officials arrested in Switzerland

Six of the seven, arrested during raid on Zurich hotel days before Fifa’s congress 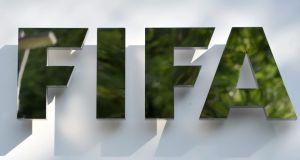 A file photo showing the Fifa logo at the Fifa headquarters in Zurich. Photograph: EPA

The US has asked Switzerland to extradite seven Fifa officials who were arrested in May as part of an investigation into alleged corruption, the Swiss Federal Office of Justice has announced.

Six of the seven, including Fifa vice-president and former CONCACAF president Jeffrey Webb, were arrested during a dawn raid on a Zurich hotel days before Fifa’s congress, plunging the world governing body into crisis.

On Wednesday evening, the US formally requested their extradition, although the process is likely to be a lengthy one as the seven can challenge any extradition ruling, and can appeal to two higher courts.

A statement from the Federal Office of Justice said: “The USA has asked Switzerland to extradite the seven

Fifa officials arrested in Zurich. The formal extradition requests were submitted to the Federal Office of Justice (FOJ) yesterday evening.

“The seven Fifa officials were arrested in Zurich on May 27th, 2015 on the basis of a request from the USA, and detained pending extradition.

“On 1st July, 2015 the US embassy in Bern submitted the formal extradition requests within the deadline laid down in the bilateral extradition treaty.

“The requests are based on the arrest warrants issued on 20 May 2015 by the United States Attorney’s Office for the Eastern District of New York, which is investigating the high-ranking Fifa officers on suspicion of taking bribes worth over $100 million.”

It is alleged that in return for the money, the officials awarded contracts for media, marketing and sponsorship rights to football tournaments in the United States and Latin America.

The payments are said to have been routed through American banks. In total, the US Department of Justice has indicted 18 people as part of its investigation.

The Swiss authorities are leading a separate investigation into the awarding of the 2018 and 2022 World Cups. Days after the arrests, Sepp Blatter was elected to a fifth term as

FIFA president, but less than a week later he announced he would lay down his mandate at an extraordinary congress which is expected to take place early next year.

Mr Blatter is reportedly under investigation himself although that has not been confirmed. The seven

FIFA officials facing extradition will now be given a hearing by the Swiss authorities regarding their case, after which they will have 14 days to prepare a response.

They can request an additional 14 days “if sufficient grounds exist”, and may ultimately appeal to both the Swiss Federal Criminal Court and the Federal Supreme Court if they so choose.