Strachan calls on Scottish fans to deliver against Ireland 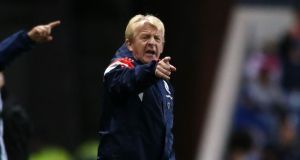 Scotland manager Gordon Strachan has called Lewis Macleod into his squad for the visit of Ireland to Glasgow. Photograph: Andrew Milligan/PA Wire.

When Scotland boss Gordon Strachan and his Irish counterpart Martin O’Neill stand in opposing dugouts at Celtic Park on Friday week, their shared history as managers of the great Glasgow club won’t be the only common ground between them.

Strachan, like O’Neill, is endeavouring to rejuvenate his nation’s fortunes on the international stage by fostering a club mentality within Scottish ranks and reengaging a somewhat disillusioned fanbase.

Results are key to the latter, he admitted when naming 27-man squad for the game today, and for both managers those have exceeded expectations in the Euro 2016 qualifiers, thus far. Ireland would undoubtedly be happier with an away point next week, however, and so Strachan has called for Scottish fans to be the difference at Parkhead in a game that even overshadows the friendly meeting with the mutual old enemy England four days later.

“Yes, absolutely, I think about six months ago we were speaking about tickets for the England game,” said Strachan. “It’s not happened that way in the last couple of months that’s for sure. It’s all been about the Republic of Ireland.”

No sympathy, then, for Irish fans left scrambling for tickets thanks to the FAI’s mismanaged ticketing policy and the SFA’s insistence on the smallest allocation permitted under Uefa rules.

“I really didn’t think I had that many friends in the Republic,” Strachan added with a smile. “Thanks for your enquiries, but, nah.”

After a 2-1 defeat to Germany in Dortmund, Scotland got their first three points on the board against Georgia at Ibrox Park last month, before a creditable 2-2 draw against Poland in Warsaw, and he hopes the home crowd will do its bit again next week.

“I think we’re all looking forward to the atmosphere. I think the atmosphere in Ibrox was fantastic, that definitely helped us. It’s going to be great here (Celtic Park) as well. We put on a performance at Ibrox and we’ve got to put another one on here. The performance is helped by the fans, absolutely, and between us we can beat anybody.”

Group D, however, has become increasingly difficult to call. Scotland are fourth on four points, behind Germany on goal difference, and with Ireland three points ahead, behind leaders Poland by virtue of scoring 10 rather than 11, Strachan reminded his side that the crowd won’t do it alone.

“If we put in a fantastic performance and Ireland’s is even better than ours then we have a problem. I can only say that we will be going out to try a certain style of football and you never know. We (coaches) rely on players, we send teams out to play and hopefully the night can be remembered for great football, great goals and good players deciding the game.”

Strachan is without rejuvenated full-back Alan Hutton thanks to the Aston Villa defender’s ankle injury, so there is a recall for Stoke’s Phil Bardsley and Celtic’s Charlie Mulgrew returns from injury and suspension.

The selection of Rangers’ Lewis MacLeod (20) has surprised some, though the midfielder has scored seven this season and is highly rated, with Strachan insisting he is there on merit and “not along just to make up the numbers”.

He added: “If things go well this week you never know what might happen. Young Andrew Robertson joined us for an afternoon and played against 11 versus 11 to work on certain things.

“After the game finished I asked the coaches (their opinion on) who played well and, apart from Scott Brown and James Morrison, he was man of the match. I am looking forward to seeing him (Macleod) and working with him.

“I saw him in the first game of the season and I caught up with videos and obviously other people watch games. So it is easy to find out if a player is playing well. We think it will be good for us to have him along.”