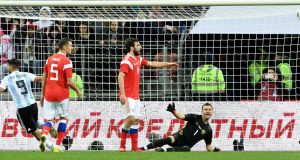 Argentina’s Sergio Agüero celebrates after scoring a goal during an international friendly against Russia at the Luzhniki stadium in Moscow. Photograph: Kirill Kudryavtsev/AFP/Getty Images

A late goal by Sergio Agüero lifted Argentina to a 1-0 win over World Cup hosts Russia in the inaugural match at Moscow’s newly-renovated Luzhniki stadium on Saturday.

Agüero’s header found the back of the net in the 86th minute, the striker beating veteran goalkeeper Igor Akinfeev after his initial shot was blocked by the Russian defence.

Led by captain Lionel Messi, Argentina were dynamic from the start of the friendly but were unable to capitalise on their chances in the first half.

Argentina’s attack expertly combined to generate several scoring chances, with Messi finding Angel Di Maria in the box in the 36th minute, but the Paris St Germain midfielder could not control the ball.

“Some of the things that we planned worked in this clash against this tough opponent,” Argentina manager Jorge Sampaoli told reporters.

“We played in a courageous, bold manner. We created resistance to the pressure our opponent put us under. We need to build on this.”

Konstantin Rausch kept Russia alive in the opening minutes of the second half by heading the ball off the line after Messi had chipped Akinfeev.

Although they regrouped in the second half, Russia struggled to keep possession, heavily relying on Akinfeev to deny the Argentine attack.

Russia tested Argentina for the first time in the 61st minute with a short-range shot by Denis Glushakov tapped away by goalkeeper Sergio Romero before defender German Pezzella cleared the ball.

“We knew that it would be a tough match and that we wouldn’t have possession in some moments,” Russia coach Stanislav Cherchesov said.

“I think our defence played correctly from a tactical point of view but we were unable to start quality attacks, especially in the first half, when we had the ball.”

Argentina’s friendly against Russia was the first match held at Moscow’s Luzhniki stadium, the venue for the opening game and final of next year’s World Cup.

Originally opened in 1956, Luzhniki was one of the venues for the 1980 Moscow Olympics. It hosted the 2013 world athletics championships before being closed for renovations to prepare it for the World Cup.

Argentina play Nigeria in the southern Russian city of Krasnodar, which will not host any World Cup matches next year, on November 14th. Russia face Spain in a friendly in St Petersburg on the same day.

Ireland boss Stephen Kenny: ‘I’ll do things my own way. Put it that way’ 06:00
Mickey Graham calls for some clarity from GAA on championship plans 06:00
Welcome to my world: Brendan Boyce walks on as everyone else joins in 06:00
Masters Meltdowns: How even Major winners wilt under Augusta’s intense spotlight 06:00
Whole new ball game: Hats, scarves, facemasks - An Ulster final like no other 06:00

1 Ireland boss Stephen Kenny: ‘I’ll do things my own way. Put it that way’
2 Masters Meltdowns: How even Major winners wilt under Augusta’s intense spotlight
3 Germany well ahead of the curve as Bundesliga gears up for return to action
4 Andrew Conway diary: Nailing the wheelie bin challenge on the double
5 My favourite sporting moment: Roscommon minors restore pride to a county
Real news has value SUBSCRIBE
Crossword Get access to over 6,000 interactive crosswords