Séamus Coleman: It’s been a disappointing year for Ireland

‘We don’t have the Dunnes, Robbie Keanes and Duffs to carry us through anymore’ 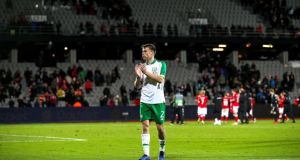 Séamus Coleman has challenged the latest generation of Republic of Ireland internationals to take up the baton from their illustrious predecessors as they attempt to make a splash once again.

With the likes of Shay Given, Richard Dunne, John O’Shea, Damien Duff and Robbie Keane having had their time in the green shirt, the Ireland squad has entered a transitional period during which the highs of qualification for Euro 2012 and 2016 and near misses for the 2010 and 2018 World Cup finals have become distant memories.

However, as he assessed a calendar year of fixtures which has seen Martin O’Neill’s men win just once in nine attempts following Monday night’s 0-0 Nations League draw in Denmark, skipper Coleman has called upon his team-mates to stand up and be counted.

He said: “There’s no secret about it, there’s no way of dressing it up, it’s been a disappointing year, no doubt about that. It’s been a learning curve for myself and some of the other lads who have 40 or 50 caps too.

“We don’t have Richard Dunnes, Robbie Keanes and Damien Duffs to carry us through anymore. We have to take that baton now and maybe some of us haven’t done that strongly enough.

“The new lads coming in will have learned a lot from this year. That, in a way, is some kind of positive to take from a negative year. Mentally we can be a lot stronger going into the games in March. That’s how we have to look at it.”

Ireland’s difficulties have been brought into sharper focus by their inability to find the back of the net with the stalemate in Aarhus extending their barren run to 397 minutes of football without a goal since Aiden O’Brien scored in Poland in September.

O’Neill rightly points to the overhaul of personnel and the difficulty of the fixture list with which his players have been presented in mitigation, but a perceived lack of ambition — the Republic did not manage a single effort on target against the Danes — has attracted criticism to the extent that his side was booed from the field after a 0-0 friendly draw with Northern Ireland last Thursday evening.

Coleman said: “It’s hard to enjoy it all the time when you’re under pressure, but you’ve got to remember what you wanted to play football for, which was to represent your country.

“You’ve got to take the good with the bad. It’s been a tough year, we can learn a lot from it and I think we can improve.”

They will have to improve significantly if they are to stand any chance of prospering when the Euro 2020 qualifiers get under way in March next year with a defiant O’Neill adamant he has what it takes to guide them to the finals.

Coleman, who was part of the side which made it to the last 16 in France two summers ago, is confident too that there will be better times to come.

He said: “We’re capable of big nights and we can’t forget that. We need to step up a little bit more. Come March, I have no doubt that we’ll be ready. I know we have to say that, but I truly believe we’ll be ready.”