Séamus Coleman hoping Gibraltar can do Ireland a favour 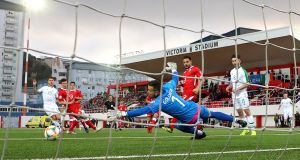 Skipper Séamus Coleman is hoping minnows Gibraltar can cause some damage after giving the Republic of Ireland a scare in their opening Euro 2020 qualifier.

Jeff Hendrick’s 49th-minute strike was all that separated the teams on the artificial pitch at the Victoria Stadium on Saturday as Ireland secured a hard-fought away victory.

Ireland beat Gibraltar 7-0 in Dublin and 4-0 in Faro in their only other previous meetings during the Euro 2016 qualifying campaign, and Coleman saw enough improvement to believe they could take points from the other teams in Group D.

The 30-year-old Everton defender said: “I hope so, I hope so. The players afterwards were happy with how they’d performed. They’re giving it their all too and thankfully we got the win.

“But I would love to see them take points from teams and hopefully they can do.”

If Gibraltar have improved significantly since the sides last met, Ireland were far from their best in admittedly difficult conditions in Mick McCarthy’s first game back as manager.

He later described the encounter as a “horrible” game and while Coleman did not disagree, he admitted that international football is getting more challenging every season with Tuesday night’s opponents Georgia another case in point.

“Georgia is going to be a sticky game home and away as well. It’s a tough group and we’ll just take one game at a time, that old cliche.

“We’re not taking Georgia for granted – they are a good side and they’re getting better with every campaign as well.”

That McCarthy’s men returned home with the points was due in part to a vital save from goalkeeper Darren Randolph as Roy Chipolina threatened to head the home side into the lead seconds after half-time.

Coleman said: “It was tough, but it was the same for both teams and we got over the line.

“We definitely would have liked to be more comfortable, I’m not going to try to butter it up any different, but [we got] three points. We look forward to Georgia now and hopefully we can get three points again.”

The Republic have never lost to Georgia in nine previous meetings, but could only draw 1-1 in Tbilisi in the last encounter, a World Cup qualifier in September 2017.

A rare Coleman goal secured a 1-0 home victory 11 months earlier and the full back would happily settle for a repeat after reaching the 50-cap mark in Gibraltar.

He said with a smile: “I scuffed it over the line, but I’ll take any goal I can get at this level.

“Fifty caps for your country is a massive achievement and I’ll look forward to hopefully my 51st if the manager picks me against Georgia.”

Randolph, meanwhile, endured a new and unusual experience in Gibraltar. The Middlesbrough goalkeeper not only had to cope with a plastic pitch and a strong swirling wind, but at one point had to try to maintain concentration as an aeroplane took off from the runway just yards behind his goal.

Asked afterwards how many times he had experienced that before, he said with a smile: “Not many. I can’t remember any aeroplanes so close.

“I didn’t look round. I could see it in the background, I didn’t need to look. The noise alone was enough.”

The game was four minutes old when the EasyJet plane took to the skies, and another 45 had elapsed before Ireland finally took the lead.

But before the goal, Randolph had to produce a fine reaction save to deny Chipolina.

He said: “It was just reactions, the cross coming in and turning and then just sticking out a hand. Luckily enough, I managed to get it around the post.

“That’s one of the key factors or components that you need when you’re probably not going to be in the game too much. It’s important to stay switched on for moments like the header in the second half.”

Like Coleman, Randolph left Gibraltar insisting that it was a case of job done.

“We came out to get the win and that’s what we did. People can say what they want, but it easy to say from the couch or looking on.

“We wanted to come here and get the win, which we did. It won’t matter come the end of the group when we qualify.”

1 Gordon D’Arcy: Digging deep only recipe for Twickenham success
2 Robbie Henshaw and Bundee Aki to lead from the centre
3 Diego Simeone raises the roof with sideline spectacle
4 Out of Bounds: remember when Darren Clarke usurped Tiger Woods?
5 Jurgen Klopp: ‘welcome to Anfield, it’s not over yet’
Real news has value SUBSCRIBE
Crossword Get access to over 6,000 interactive crosswords