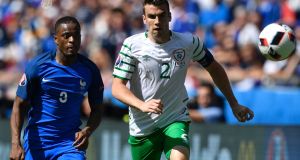 Séamus Coleman has been included in the Republic of Ireland squad for the friendly against Oman and the World Cup qualifier against Serbia in Belgrade despite struggling with ankle ligament damage. Photograph: Martin Bureau/AFP/Getty Images

Republic of Ireland manager Martin O’Neill has named defenders Séamus Coleman and John O’Shea in his squad for the upcoming friendly against Oman and the opening World Cup qualifier against Serbia despite both defenders carrying injuries.

Full back Coleman has been struggling with an ankle ligament injury while centre back O’Shea suffered a hip injury in the defeat to Middlesbrough at the weekend.

Coleman, O’Shea and Derby County midfielder Jeff Hendrick will be assessed by medical staff when the squad gathers next Sunday ahead of the friendly game against Oman on Wednesday August 31st at the Aviva Stadium.

The squad will then travel to Belgrade for the opening Group D encounter with Serbia on Monday September 5th.

O’Neill is without centre back Shane Duffy for the Serbia game due to suspension after his sending off in the Euro 2016 second round match with France in Lyon.

BREAKING: Martin O'Neill has announced his squad for the upcoming games against Oman and Serbia! #COYBIG pic.twitter.com/c9oq3G9N7l

The manager is boosted by the return from injury of Marc Wilson, who missed Euro 2016 with a broken leg, while Paul McShane and Alex Pearce are also included in the 28-man squad.

Harry Arter also returns and he is joined by his Bournemouth team-mate Eunan O’Kane, while Bristol City winger Callum O’Dowda will look to to build on the promise he showed when included in Ireland’s training squad in the build-up to the Euros.

Robbie Keane has been included in an unchanged list of forwards for the two games.

*Indicates player is currently on loan

5 Ulster maintain unbeaten start to go top of Conference A