TV3 to show 22 games including shared coverage of final 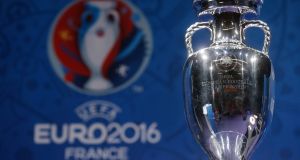 The Euro 2016 soccer trophy on display in Paris on Wednesday at an event to mark 100 days to the start of the competition. Photograph: Christian Hartmann/Reuters

RTÉ and TV3 will both show this summer’s Euro 2016 final on Sunday July 10th after the breakdown of the live matches between the two Irish broadcasters was confirmed on Thursday.

RTÉ have sub-licensed 22 of the 51 games to TV3, but hold on to the Republic of Ireland’s three games in Group E and also will have first choice on games in the knockout stages of the competition.

TV3 will show 16 of the 36 matches in the group stages, including Northern Ireland’s meeting with Ukraine on on Thursday June 16th, and England’s opening and closing games in Group B against Russia and Slovakia.

The station will show three of the eight Round of 16 games, two quarter-finals, with RTÉ holding on to the two semi-finals. Both channels will then broadcast the final live.

One big advantage to the viewers will be the ability to choose which of the closing group games they want to watch as RTÉ and TV3 will show one game each as the six groups reach their conclusion.

RTÉ have announced that they will also broadcast a highlights programme on each night of the tournament.

All televised matches will be available to view live and on-demand on RTÉ Player in the Republic of Ireland.

TV3’s matches s will be available on the go and online on the 3player app or 3player.ie