Roy Keane: ‘We want players to put their bodies on the line’

Keane said that, if he was in the Austria camp, he’d be looking forward to playing Ireland 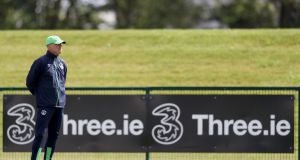 Jon Walters and Stephen Ward played a full part in the Irish squad’s training session at Abbotstown on Friday morning and both are set to be available for selection for the Austria game on Sunday despite minor knee problems.

Walters had missed training on Wednesday when he had worked by himself in the gym instead, while Ward required some minor attention after the session at Lansdowne Road but neither appeared to have any problems this morning and both seem set to start the World Cup qualifier.

He’s fine,” said assistant manager Roy Keane about Walters afterwards. “ Obviously he’s had a few days rest after the game on Sunday but Jon is an experienced player and knows his body so he felt he needed the few days.”

Keane says that if he were in the Austrian camp he would quite fancy their chances of coming to Dublin and getting a result with the midfielder dismissing the notion that there is any form of “disarray” among their ranks.

“If I was in their camp, I’d be looking forward to playing Ireland. It’s a way of getting back into it. I don’t think they’ll be frightened to death of playing Ireland.”

He said that Ireland had learned in Vienna that they could beat Marcel Koller’s side but, he said, the home side will probably feel they should have taken a point from the game that night. “There was a lot of talk beforehand, that we didn’t have a great record against them but then they had a great chance late on and probably should have equalised so there can’t be any talk of easy games; we all know it’s goingto be tough.

Three players – Alan Browne, John Egan and Andy Boyle – have left the group as manager Martin O’Neill trims his extended squad back in the run up to the game. Keane says that there is a new “energy” amongst those still here as kick-off gets closer.

“We’ve shortened the squad and you feel it which is good. I really enjoy the couple of days before the game because there’s a different type of energy, a little bit of needle in training; it’s getting a little bit of tasty which is great. That’s what the game is about.

“In my mind we are going into battle on Sunday.”

1 Larry McCarthy to become first overseas president of the GAA
2 Ryan Baird scores a hat-trick as blue wave rolls over Glasgow
3 Jack Byrne puts on a show as Shamrock Rovers beat Dundalk
4 On healing and wild hurling: The re-education of Diarmuid Lyng
5 Joanne O’Riordan: Mo Farah should have to face Jeremy Kyle
Real news has value SUBSCRIBE
Crossword Get access to over 6,000 interactive crosswords