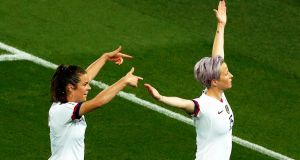 Megan Rapinoe (right) of the USA celebrates with her team-mate Kelly O’Hara after scoring her second goal in the Women’s World Cup quarter-final against France at the Parc des Princes. Photograph: Ian Langsdon/EPA

It was fitting that Megan Rapinoe, the focus of unwanted presidential attentions before the game, was the player to power the US into a semi-final with England, her two goals emphatically ending France’s hopes of a men’s and women’s World Cup double.

“Le Grand Match” was a slightly more measured billing from Fifa than Rapinoe’s hopes of a “total shitshow circus” but either way, this meeting between the holders and the hosts did not disappoint.

No player has been directly involved in more goals in the World Cup than Rapinoe since she made her debut in the competition in 2011 and, although Wendie Renard’s late header launched a spirited late fight back, Les Bleues were not able to find the equaliser in an end-to-end spectacle.

An hour before kick-off the Parc des Princes was already heaving in the searing heat, a French record temperature of 45.9C having been reached in the southern area of Gallargues-le-Montueux. In Paris the temperature had dropped to a still fiery 29C by the 9pm kick-off.

In a sight unfamiliar to regular women’s football attendees, touts shifted among the throbbing crowds filing through the streets.

With 30,000 France fans expected to outnumber the visiting supporters three to one, the home side had the natural advantage but the volume was almost matched by the US contingent.

Rapinoe stood silent, hands by her side for the American national anthem as expected. Alex Morgan also did not sing, perhaps prompted into silence by president Trump’s loudmouthed criticism of her colleague.

But as La Marseillaise rang around the warm ground it sent a shiver down the spine.

Four minutes in Rapinoe lined up a free-kick from a tight angle on the left after Griedge Mbock had pulled back Morgan. Rapinoe’s strike slipped past the waiting Julie Ertz at the near post, through the legs of the mercurial France captain, Amandine Henry, and past the helpless and blindsided goalkeeper Sarah Bouhaddi.

It was a hammerblow for the home nation, and the expected 14 million French TV viewers, but for the neutral a delight, springing the game wide open from the off. That said, with the US never having lost a World Cup match when scoring first (34 wins and four draws) and the French never having won a World Cup game when conceding first, records would have to be broken in the following 87 minutes to reverse the fortunes of Les Bleues.

France’s first effort came 10 minutes later. Eugenie Le Sommer flicked a header towards goal but Alyssa Naeher, a weak point in the USA’s world-class line up, held on to it to ease any nerves.

The fitness of Le Sommer was a concern before this tie but the joint-leading goalscorer for France at World Cups was in full flow as she powered at right back Kelley O’Hara time and time again. France seemed to have identified the US full backs as a potential weakness – Kadidiatou Diani was in her own battle on France’s right with the former Chelsea player Crystal Dunn, who struggled but managed to contain the Lyon winger.

However, it was in the middle that the US were most effective, the instinctive relationship between Becky Sauerbrunn and defensive shield Ertz forcing Henry away from the pockets of space she so frequently exploits around the penalty area.

The USA looked to catch France sleeping straight after the restart and put the game to bed. This time though the early strike was not forthcoming. Sam Mewis, surprisingly keeping the NWSL MVP Lindsey Horan out of the starting XI, forced a tidy save from Bouhaddi. From the resulting corner Morgan had a shot blocked.

In a rare slip in composure, Ertz was muscled off the ball on the edge of the US box and Valerie Gauvin laid the ball back to Henry, her shot threaded between the bodies but was wide.

With every France pass, throw and touch being urged on with extreme gusto, and the chants of “USA! USA!” drowned out, navy shirts poured forward. France were in the ascendancy for much of the half, forcing Ertz to slot backwards to form a back five.

A high cross from Diani left Naeher floundering on the floor by the far post and the ball fell to Le Sommer, but the forward could only slam it into the side netting.

France’s attacking, though, left gaping holes at the back, and it was Rapinoe, this time with a goal from open play, who punished the boldness of the French.

Morgan, powering down the right, threaded a defence splitting ball to Tobin Heath who sent a teasing ball across the six yard line, with the French focused on the presence of Mewis, Rapinoe was on hand to power home.

With nine minutes left France finally found a breakthrough, Renard’s powerful header beating Naeher. With the crowd screaming their team forward and undoubtedly adding fuel to heavy French legs they desperately sough the leveller, but it was too late. – Guardian