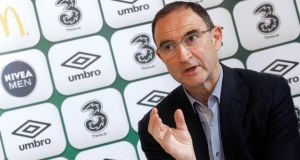 Republic of Ireland manager Martin O’Neill: “If he wants to call me, fine. If he phones me some time in July, of course I’ll pick up the phone and I’ll speak. But I’m not chasing it anymore.” Photograph: Donall Farmer/Inpho

Stephen Ireland appears to have driven another nail into the coffin containing his once promising international career.

The Stoke City midfielder, who added to Steve Staunton’s already considerable pile of woe in late 2007 with the manner in which he walked out on the squad before later alienating Giovanni Trapattoni irrevocably when, and then after, the pair met to discuss the situation, has declined over the past week or so to take or return calls from Martin O’Neill.

The manager said last Friday week when he came to Dublin to name a squad of 32 for the forthcoming end-of-season international friendlies that he intended to call the 27-year-old in order to arrange a meeting at which the player’s desire to return could be finally clarified.

His agent
The Corkman appears to have short-circuited the process, however, by neither answering nor returning O’Neill’s calls, preferring instead to have his agent contact the FAI to say he does not want to meet until July. Asked yesterday in Waterford whether Ireland’s conduct suggested a certain lack of respect, O’Neill replied: “Well, I think you will have to come to whatever conclusion you come to.”

O’Neill insisted the door remains open to the midfielder if he wants to get in touch.

But he made it clear as he recalled a sequence of events that included (ironically enough given Ireland’s criticism of Trapattoni) the suggestion that there might have been confusion because the player had two phones, that from this point on he would be only taking calls from the player not making them.

“The order of events was: I had a meeting with a couple of the Stoke City players a few weeks ago. Fine. I deliberately didn’t want to speak to Stephen in that group. Obviously, I wanted to speak to him myself. But then tried to call to get something organised; fine, I’m not always immediately responsive myself to telephones. I didn’t leave a message because it kept ringing,” said O’Neill.

“But at the same time we had the FAI, Mary (O’Brien, in the association’s international department), trying to contact him also. I think Stephen ended up through Glenn Whelan having two numbers [O’Neill seems to have been told by Whelan that Ireland had a second number]. Two different phones. Fine. No problem.

“Then his agent called Mary to say Stephen would like to be considered but would like a conversation sometime in July. Fine. This following on from Mark Hughes had said in the newspaper. I thought it was very obvious then that Stephen didn’t want to be involved in these games. Mark Hughes’ answer probably had a ring of something reasonably sensible – he’d just signed a contract.

“But if he’s not going to be available for the games, that’s fine. . . I spoke to the agent and said: ‘Listen, if he wants to get involved I’m not going on chasing at the end of the day. It’s really as simple as that.’ This conversation wasn’t for my benefit or your benefit coming in – it was just going on.

Chasing it
“I assume that the games coming up here are obviously too soon for him . . . But the truth is this: I’ve left it in a situation where I’ll not call. It’s really up to Stephen. If he wants to call me, fine. If he phones me some time in July, of course I’ll pick up the phone and I’ll speak. But I’m not chasing it anymore. Alright? It really is as simple as that.”

Pressed on the idea that Hughes was being reasonable when he suggested that Ireland, some seven years and countless hints of an impending return after he left the squad, now needs additional time away because he has recently signed a new, longer -term deal at the club where he spent the season, O’Neill remained diplomatic.

However his overall view of the current situation remained clear enough.

“I can understand it from a club managerial viewpoint,” he said. “He’s just signed, got into the side, got a new contract, getting sorted out. But, of course, I’m now looking at it from an international viewpoint.

“Players here have made themselves available, niggles and everything; they want to be involved in the squad. Absolutely fine. It’s not life or death with me at the end of it all. I’ve said this before. If Stephen really wants to involve himself here, it’s actually quite simple. But sometimes it can’t always be on your terms. That’s all.”