O’Neill and Keane among contenders for Ireland job 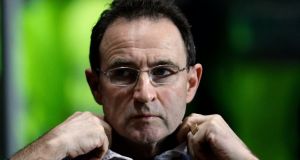 Martin O’Neill (pictured) is known to be interested in the job, as is Roy Keane. Photograph: Reuters

FAI chief executive John Delaney said the board will decide over the coming days how to go about replacing Giovanni Trapattoni who parted company with the association this morning “by mutual consent”.

The Italian met with Delaney and other association officials at 9.30am in Dublin where it was decided, according to the organisation’s chief executive, “that the right thing to do was to part company at this point.” He said that “there was a lot of emotion in the room”. Marco Tardelli and Fausto Rossi have also departed.

In a statement issued through the association the departing manager said: “I want to thank everyone in Ireland who has given us their support during our time here which has always meant a lot to us.

“We leave this country with emotion because we understand the Irish supporters who have a well-deserved international reputation and they have our utmost respect.”

Trapattoni had until the end of May remaining on his contract as, it is believed, did his assistant, Tardelli and fitness coach, Rossi with the collective value of their outstanding deals believed to be in excess of €1 million.

It is not clear how much the three have been paid in order to depart early.

Delaney mentioned Chris Hughton, Brian McDermott, Mick McCarthy, Martin O’Neill and Roy Keane as possible contenders for the job but said he and the board would take time to weigh the situation up.

It remains to be seen whether the association is willing to stray outside the expected field as it did last time when appointing Trapattoni amid some fanfare but Denis O’Brien is likely to have a significant say in the matter as his funding would almost certainly be required again if a more expensive option was to be considered.

O’Neill is, in any case, known to be interested while sources close to Keane have also suggested that he would be too. McCarthy, meanwhile, had a clause in his Ipswich contract allowing him to leave in order to return to the post without the need for compensation to be paid but that expired in August and he has two years left on his contract with the club.

It’s something that we’ll reflect on now over the next few days,” said Delaney. “We’ll take some soundings from within football and then the board will make a decision. Over the next week or so (we will decide) how we appoint the next Ireland manager”.

The decision to remove Trapattoni comes after the Irish team’s defeat in Vienna – his first ever in an away qualifier - all but mathematically extinguished hopes of reaching the World Cup in Brazil next summer.

The real damage was done at home, however, with the team losing two qualifiers in the one campaign for the first time in nearly 50 years and they are on course to take just two points from their games against the nation’s likely to occupy Group C’s top three positions.

Results have been disappointing, Delaney acknowledged, and the crowds at some of the games poor with many supporters citing the brand of football produced under the manager.

“What we want is an Irish team qualifying for tournaments and a full Aviva,” he said, “that’s only common sense”.

Ireland had, the 46 year-old said, played better football under McCarthy, who is clearly amongst the leading contenders to get the job although the now Ipswich boss’ actual record in terms of matches won and lost was broadly similar with 29 victories and 20 defeats in 68 games compared to 26 and 16 respectively in 64 for Trapattoni.

1 Royal Portrush: Golf clubs ‘in real distress’ as eyes turn to 2021
2 Colin Kaepernick’s exile is too fresh for NFL to speak out on US protests
3 Rodgers shunned by some family members for leaving Celtic
4 Ken Early: Why international football is fading into obscurity
5 ‘A radical departure’: Who are CVC and what are their plans for rugby?
Real news has value SUBSCRIBE
Crossword Get access to over 6,000 interactive crosswords