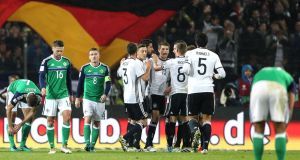 Germany claimed their third successive victory to crown a highly impressive start to life in Group C. This display in Hanover had a clinical quality to it from the world champions, with the bonus of a brace of early goals by Julian Draxler and Sami Khedira.

Northern Ireland offered little other than persistent determination and a refusal to fold, for it could have been a humiliation. They will have much easier nights to contend with as the campaign unfolds.

Ultimately it was a satisfactory night for the Germans, whose coach Joachim Löw can extract extra personal satisfaction. Having overseen a 94th win, he has now equalled the record set by the legendary Sepp Herberger.

His counterpart, Michael O’Neill, on the other hand, must prepare his side for a huge game against Azerbaijan next month, the result of which could shape their prospects of finishing as group runners-up.

Ireland, as expected, made changes from the 4-0 win over San Marino last Saturday at Windsor Park. Conor McLaughlin was omitted for the vastly experienced right-back Aaron Hughes, with Stuart Dallas and Niall McGinn also absent, the latter on the bench. Rangers defender Lee Hodson was a surprise choice, but perhaps his overall versatility was in O’Neill’s thoughts.

Germany, meanwhile, were unchanged from their highly impressive 3-0 weekend victory over Czech Republic in Hamburg, with Khedira preferred to Ilkay Gundogan, who was one of the substitutes.Die Mannschaft’s attacking options of Mesut Özil, Thomas Müller - who scored the only goal the last time the sides met, at Euro 2016 - and Mario Götze took on a predictably extravagant and ominous look for the visitors, who, unsurprisingly, were emphasising a safety-first approach.

Correspondingly, the presence of Jamie Ward, on loan at Burton Albion from Nottingham Forest, in Northern Ireland’s line-up, illustrated a certain comparative gulf in personnel.

Indeed, the header from six yards by Götze, who fastened on to a Müller cross from the right only to be denied superbly by Michael McGovern in the Northern Ireland goal, demonstrated a clear, businesslike attitude from the world champions.

Joshua Kimmich and Jonas Hector, the Germans’ two hugely impressive full-backs, were playing much of the opening spells in the visitors’ half, with the latter firing a shot from distance over.

If Löw felt he might need a bit of patience for the breakthrough, he needn’t have worried. Draxler took 14th-minute aim from 20 yards to shoot past McGovern, the culmination of incessant pressure.

Less than four minutes later, Northern Ireland’s defensive ill-discipline and loss of the aerial battle was exposed with the second goal. Khedira nodded home from close in, escaping the attentions of Oliver Norwood at the far post, after neat set piece and crossing work by Toni Kroos and Ozil.

The Ulstermen were already at serious risk of being unpicked from every German advance. Other than a bright raid by Ward, shooting straight at Manuel Neuer after dispossessing Jérôme Boateng, the hosts were commanding and creative. As thankless tasks go, Ward, at least, worked hard going forward to offer occasional brief respite.

As a sure sign of his confidence, Löw replaced Özil with Gundogan at the break, Germany all measured probing and neatness, with Northern Ireland attempting stouter defence and Magennis and Ward reasonably decent outlets for any longer ball away from trouble.

It was a question of at least consolidation in the second half for the hosts and, with Götze always on hand to ghost into danger areas, Gareth McAuley and Jonny Evans, in their taxing central defensive roles, had to be alert for constant peril.

Nevertheless, holding the two-goal cushion, it was difficult to escape the impression Germany, clever in movement and holding court, were content to ease up on their earlier intensity.

For freshness, O’Neill sent on Niall McGinn for Ward but it made little difference.

Germany were always composed, inching to add a third goal - but despite a raking shot by Khedira in the closing moments, the main objective of the night had already been secured.

1 Coming fourth in the Olympics didn’t change this fearless quartet, time did
2 World Rugby study advises removal of reset scrums to reduce Covid-19 risk
3 Sideline Cut: Vignette shows why Bird is the true shark in The Last Dance
4 Ken Early: Liverpool fans, Bamber Gascoigne and a close shave in Istanbul
5 From TB to polio: GAA is no stranger to disease disruptions
Real news has value SUBSCRIBE
Crossword Get access to over 6,000 interactive crosswords