Neuer included in Germany squad but no place for Götze

Löw will continue in his role as Germany coach until 2022 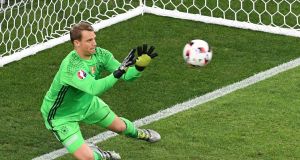 Germany’s first-choice goalkeeper Manuel Neuer was included in their preliminary World Cup squad despite having been out of action since September but World Cup final scorer Mario Götze was left out.

The 32-year-old Neuer suffered a broken bone in his foot and only returned to training days ago but Germany coach Joachim Löw decided to take four keepers to a training camp in the Italian Alps from May 23rd.

“We will see how it goes from day-to-day,” Löw explained. “What is clear is that without match practice to go into a World Cup is not possible.

“He knows that. We will see at the end of the month or early June how things look and then we will have an honest discussion.”

Löw left out midfielder Götze, who scored the winning goal in the final against Argentina four years ago but has had a lacklustre season. “We saw that it was not his season, not the normal form with his quality,” Löw added. “I think he has immense quality and he has proved this but he was not in that form.”

Fellow Borussia Dortmund player Marco Reus’ hopes of making his first World Cup got a boost after he made the cut. Reus, who missed half of this season through injury, was ruled out of the 2014 World Cup after being injured in Germany’s last warm-up match.

He also missed Euro 2016 through injury. “Marco is a special weapon, he has special gifts,” Löw said of the forward. “He has great intelligence in the game and in the second half of the season he was in really good form. I expect quite a bit from him for the tournament.”

Löw also opted to stick with the experienced Mario Gomez as his second-choice striker behind Timo Werner and picked Freiburg’s Nils Petersen ahead of Sandro Wagner.

1 Shane Lowry agreeing to play in Saudi Arabia is an unfortunate choice
2 Liverpool have a shot at genuine legacy season
3 Leinster get the opponents nobody wanted
4 TV View: Woolly hats fuel Roy’s forebodings as Liverpool secure place on perch
5 Corofin combine total football with dark arts for three-in-a-row
Real news has value SUBSCRIBE
Crossword Get access to over 6,000 interactive crosswords