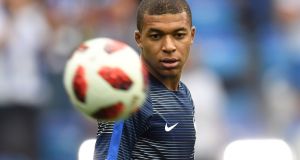 Kylian Mbappe: has really impressed at this World Cup with his pace, control and dribbling skills that combine to give France a cutting edge in attack. Photograph: Kirill Dudravatsev/AFP/Getty

So, here we are in the semi-finals. This was the target set for Didier Deschamps by the French Federation, so he can take a bow and say the job’s done but now we’re in the last four the tournament really begins.

We’re two more wins from a second star on the France shirt and we have the quality to go all the way, especially if Kylian Mbappé carries on playing the way he has been in the past couple of games. Like just about everybody, I have been really impressed by him.

The Argentinians were not very fast and left great spaces that allowed Mbappé to express his pace and show how dangerous he can be if you let him run at you. The way Argentina played, with a high back-line and slow defenders, was almost too good to be true from a French point of view.

I was really looking forward to how he would cope with the challenge of playing Uruguay, who we knew would defend deeper, leave him less space and look to throw him off his stride.

But even with less room in which to manoeuvre we saw just how useful Mbappé can be. Right from the off he took defenders on, looking to create danger with his close control, acceleration and dribbling skills. I was impressed by the way he went at them right from the start. Deschamps has clearly told him to express himself, to enjoy himself even, and that is the way he has to play.

Some criticised him for what they thought was a touch of the Neymars in the second half but you have to just go along with his exuberance – he’s at the World Cup, playing huge games that the whole world is watching and he’s having fun – it’s great. (That said, I may have taken a different point of view back in my days as a defender.)

I liked the way Mbappé was strong physically, stood up to the opposition and was able to resist in a physical battle. He has no fear, and that’s where I am reminded of Thierry Henry and David Trezeguet from 1998.

They also possessed this insouciance and ambition that allowed them to perform on the biggest stage in the world. I remember the shootout against Italy in the quarter-finals when they stepped up to take a penalty when some of their more experienced team-mates really didn’t want to – me included. And they both scored.

It is early to be comparing Mbappé with Pelé or Thierry Henry, however much I understand the need to find parallels. At the same age, I would say Thierry did not have the same ability as Mbappé but he had intelligence, brain and the desire to become the best.

I think Mbappé also has everything he needs to become a great. I have high hopes for him and if he continues to progress in the way he has over the past year or so then he will have an amazing career. Even if he has 75 per cent of Henry’s career it would be great . But, really, there are no limits.

Mbappé is with a club where he will be looked after and his talent will be nurtured. What he does next is vital.

Who knows what might happen if Cristiano Ronaldo decides to leave for Juventus and Real Madrid want to recruit Mbappé? I remember Henry left Monaco for Juventus and that it didn’t really work out for him. He made the right choice to join Arsenal and find a manager who would help bring out the best in him. That’s why choices are so important.

Mbappé needs time and we mustn’t rush him. But I have great faith in his ability to succeed because I can see the work he puts in for the collective. He offers solutions with his runs, his willingness to make himself available and even take knocks for the team.

In France, some fans railed against Antoine Griezmann because he didn’t celebrate his goal against Uruguay. He explained that he has many really close friends who are Uruguayan, guys who have helped shape his career and guys who are really close in his personal life, like Diego Godín, who is the godfather to Griezmann’s daughter, so I’m not too worried by that.

He had an uneven performance in that match and still hasn’t finished a game at this World Cup, but seven goals in his past six knockout games, at Euro 2016 and here at this World Cup, show us he’s a big-game player. Although he may have been a bit lucky with his goal against Uruguay because of the goalkeeper’s fumble, it’s a timely reminder of the importance of shooting on target.

One of Didier’s great qualities is the way he controls his squad. He’s the boss. He has been obliged to change a lot of players since Euro 2016 and yet he has found a compatibility among those he has picked. Didier also has the intelligence to give his players space – you won’t find him lecturing the youngsters about how it was in his day. He’s too smart for that. And he’s reaping the rewards for his approach. You can see the players believe in him and what he’s doing.

What impressed me most against Uruguay was how we controlled the game. Some of the younger players are showing great maturity and I was really struck at how well this France team managed things once they had hit the second goal. Physically, too, the players look dominating. Our full-backs were tough in the tackle, our central defenders commanding – I saw that Luis Suárez never touched the ball in the France penalty area and you have to give our guys great credit for that.

I got the impression that, physically, our team still has a bit under the pedal and that is what encourages me for the game to come against Belgium, because we will need that extra energy. Nobody has really pushed us yet. And with N’Golo Kanté protecting the defence like nobody else at this World Cup – what a player – we are looking solid at the back.

Belgium, though, have had two big games that might give them an edge against France. Whereas we still haven’t been fully tested, they have been through examinations of their talent and their character that can give them a certain confidence.

Coming from behind to beat Japan, having to change their game plan, find solutions and then winning in dramatic style like they did gives a team a huge boost. It gives you belief, too.

And they have just eliminated the tournament favourites, a good Brazil team, which is another big plus for the Belgians. Their confidence will be sky-high and rightly so. They have been tested and found the resources, found the answers. That is why I make them slight favourites for the semi-final.