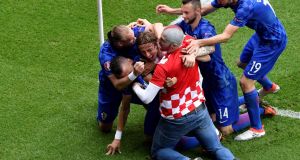 Luka Modric is mobbed after scoring the winner for Croatia against Turkey in Paris. Photograph: Afp

Croatia and Turkey are two of the sides sometimes tipped as dark horses, but on the evidence of yesterday’s game at the Parc des Princes neither of them will be threatening the winners’ podium at Euro 2016.

Croatia were the better side and deserved their 1-0 win, but you had to wonder how a side boasting outstanding talents like Ivan Rakitic and Luka Modric in midfield could have played such a sterile, unimaginative kind of football.

You would have expected that Croatia could play some effective stuff through the middle, but instead they preferred to funnel the ball out wide and hit an endless stream of crosses towards the lone striker Mario Mandzukic.

Croatia’s captain, the right back Dario Srna, had 10 crosses in the first half alone, while Rakitic, the Barcelona maestro, completed only 12 passes, eight of which went backwards.

It’s not that Croatia’s crossing was inept – 15 of their total of 35 found a Croatian target, which is quite a good success ratio – it’s more that this seemed a bewilderingly basic way to play for a team that has such quality through the centre.

Maybe they’re playing the sort of game that suits Srna rather than Rakitic. It’s fair to say that Rakitic seemed to be in a bad mood for much of the game, bickering with the left back Ivan Strinic on more than one occasion.

The Turks were magnificent in the stands, and dismal on the pitch, where they took a literalist approach to the question of how to hurt Croatia.

Centre forward Cenk Tosun got away with an elbow that cut Vedran Corluka’s head ushering forth an impressive flow of blood.

But Corluka, who re-entered the field with a bandaged head, would have the last laugh, using his bandage as a prop to help him waste time and infuriate the Turkish nation.

In the end Modric did make the difference, with a bizarre yet beautiful goal just before half-time. There seemed to be no danger as a clearing header dropped 10 yards outside the box, but Modric caught it on the full with a dipping volley that spun and bounced before the goal-line, flummoxing Volkan Babacan on the way into the corner of the net.

As long as Croatia have the likes of Modric they will have a chance, but they might also want to adjust their game plan to get the most out of their talent.

Cacic told uefa.com: “Luka deserves to be talked about – this was one of his best matches. He really played well, he was our leader. He scored this magic goal and it turned out to be the only one of the game.”

“We need Luka in this form because, when he is, the whole team looks different. It looks better and more aggressive."