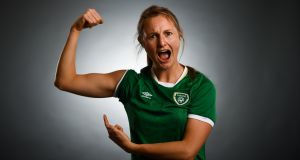 Kyra Carusa is set to make her first start for the Republic of Ireland against Denmark in Tallaght on Thursday. Photograph: David Fitzgerald/Sportsfile

Having deviated from becoming a doctor to pursue a career in football, American-born striker Kyra Carusa should finally get her first Republic of Ireland start on Thursday night.

The forward represented her homeland at under-23 level but switched allegiance through her grandparents in time to feature off the bench in the European qualification win over Montenegro 12 months ago.

It seemed from that point in Petrovac that Carusa would figure prominently during the business end of the campaign but she was kept on the bench by Vera Pauw for the two meetings against Germany and the ultimately decisive defeat in Ukraine.

With Ireland missing out on earning a playoff, the long journey to the 2023 World Cup in New Zealand and Australia begins at Tallaght Stadium on Thursday.

There will be no points on offer against Denmark, yet the friendly does present a showcase for the likes of Carusa to push her claims ahead of the qualifiers starting in the autumn. She’ll also be well known to the illustrious visitors. The 25-year-old’s team, HB Køge, lead the Elitedivisionen and her winner against champions Fortuna Hjørring on Sunday keeps her top of the scoring charts too.

Denmark’s standing means that even after marginally missing the cut that guarantees the top six leagues in Europe three places in the revised Champions League, HB Køge succeeding in splitting traditional powerhouses Brøndby IF and Fortuna Hjørring will see her figure in the competition next season. That her team is newly promoted makes their strides all the more impressive.

“HB Køgeis definitely on the map, mostly because they’ve been promoted for the last couple of seasons,” Carusa explained about the club based on the outskirts of Copenhagen.

“This project was started to have the same facilities, staff and resources as a men’s team.

“They saw that opportunity in Denmark to start a new foundation. It’s really cool because it makes you a dark horse. To have a team besides Brøndby or Fortuna sitting at the top of the league hasn’t happened for 20 years.

“I’ve seen that Champions League mentality over my year at the club. A lot of professional programmes, especially for women’s football, don’t entirely commit to that step. Having that full commitment from the beginning means everything.”

So too would mirroring her club form with a starting place for Ireland. Carusa kept her options open, both from career and country perspectives, but seems content to have accepted the FAI’s invitation.

“I studied human biology in my undergrad at Stanford, thinking I really wanted to get into the medical field, to become a doctor and all that jazz,” she said. “I did integrated marketing at Georgetown University, working with non-profits and start-ups in Washington DC and New York, but continuing this professional soccer journey is what I want.

“I was lucky enough to have played with quite a few internationals such as Tierna Davidson, Catarina Macario and Andi Sullivan during my time with the United States under-23s. I wouldn’t have brought in the same mindset to the Ireland set-up if I hadn’t been involved with the US.

“My grandparents were from Cork and Laois and I had visited Ireland when I was younger. A coach of mine at Georgetown, Dave Nolan, was from Ireland and used to badger me about declaring. I do appreciate him for pushing me that direction.”

Ireland follow up Thursday’s game with another friendly on Sunday against Belgium in Brussels. Both games kick off at 6.30pm and will be televised live on the RTÉ Player.