Kylian Mbappé: a ‘new god’ to rival the best in the world 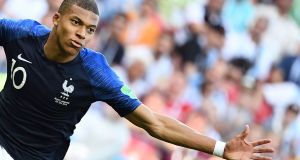 The most common comparison that has been made these past few weeks has been with one Brazilian great, Ronaldo, but there have been messages from the greatest of them all, Pele, as Kylian Mbappé equalled some of his goalscoring feats from 1958.

He has a way to go before he matches the career achievements of either man, but by Sunday evening, aged just 19 years, six months and 25 days, he may have eclipsed two best players of the modern era, Cristiano Ronaldo and Lionel Messi, on one front by becoming a world champion.

Both men tried but failed to carry decidedly average teams to the title whereas, Mbappé has the luxury of being one of several key components in what has, at its best, looked like a really great one.

“Messi and Ronaldo have not fallen, they’ve been the best for 10 years and will still be at the top,” observed Marcello Lippi, who managed Italy to the title in 2006, after France’s game against Argentina. “But new gods are being born, like Mbappé.

“Yes, he looks like him [Brazilian Ronaldo]. He runs at that extraordinary speed with the ball at his feet. He has incredible quality and – let’s not forget – a strong team around him from [Antoine] Griezmann to [Paul] Pogba.”

Both men have accepted their roles as parts in the supply line to the PSG player over the past few weeks. Both have the ability to exploit his astonishing speed; they are, it seems, instinctively tuned into his movement and possess the range of passing to make the most of it.

His pace clearly unnerves opponents who are left with an unenviable choice; to stick close, then get left for dead when the ball is played into space behind them; or drop off and allow him to run directly at them in possession.

The control he exerts over the ball is thrilling at times, and some of his passes prompt gasps or shrieks of excited joy in the stands. Normally supporters watch a player and think: “If only he could get the ball to X,” but Mbappé repeatedly does things that spectators are thinking quickly enough to have anticipated.

Didier Deschamps suggests that the 19-year-old’s performances here merely highlighted the scale of his potential. The French coach is adamant that he will get better – much better.

The player certainly seems determined to get the best out of himself in a way that few are. Atmane Airouche, the president of his first club, Bondy, a local outfit where he grew up in the northeastern suburbs of Paris that has a good track record of bringing talent through, told the BBC of meeting him immediately after France had won the European under-19 title in Germany two years ago.

“We were shocked that he didn’t want to go partying with his teammates,” he said. “Instead he wanted to go straight home. To him, he had achieved his goal to be European champion and was already thinking about his next goal: going back to Monaco, getting into their team, winning more titles.

“Then, when Monaco became champions [in 2017], all the others went out partying. He was the only one who went home to sleep. That’s what is so great about him.”

His starring role for Monaco that season, 26 in 44 games in all competitions, is what announced his arrival at the game’s top table.

Clubs across Europe had been chasing him for years, though. Cristiano Ronaldo, whom the young French man idolised as a kid, was rolled out at Real Madrid when he came to visit. Mbappé had been at Chelsea for a week’s trial two years before that, aged just 11, but they passed on him because, it seems, he did not score in a thumping of Charlton.

Liverpool and Bayern Munich tried their luck at different times, too, and as he weighed up his first professional contract at Monaco, Arsene Wenger travelled in the hope of bringing him to Arsenal. The veteran coach is said to have been deterred by the request for a signing-on fee that exceeded €7 million.

However, Mbappé insists that money is not what drives him. He plays for fun, like the kid remembered by Antonio Riccardi, one of the Bondy youth team coaches who also used to babysit him.

It is a devotion, Riccardi insists, that has served him well. “Kylian was always enthusiastic,” he says. “You have to work hard when you have a talent like he does, because if you don’t, others who are less talented but are working hard can catch up.”

He is certainly focused, as is clear from his reply when he was asked about the prospect of returning to Madrid for a Champions League match and coming up against his long-time hero, Ronaldo. “I admired him when I was younger,” he said, coolly, “but that ended. Now I go to the Bernabeu to play and to win.”

Still, he can come across as surprisingly grounded in interviews, the result, perhaps, of his upbringing in a close-knit family. His father, Wilfried, from Cameroon, has been a major influence on his career since coaching him as a six-year-old, but he had been involved with Bondy before Kylian was even born, and club officials talk of him with the respect he earned in his own right, both as a former player and community activist. Mbappé’s mother, Fayza, meanwhile, is from Algeria, and a former handball player. The couple adopted one of their other sons, Kembo Ekoko, also now a professional footballer, after his parents had sent him from Congo to live with relatives in Paris.

Mbappé, in any case, has promised all of the fees and bonuses he is due from the French Federation at this World Cup (about €300,000 if they win on Sunday) to a charity that works with disabled children in France.

His outlook, meanwhile, seems carefree and his performances out on the pitch utterly unaffected by the pressure that should come with playing at the highest level and having to live up to the astonishing level of expectation he has already generated.

Perhaps it will all catch up with him on Sunday evening and he will suddenly be struck down with stage fright at the Luzhniki Stadium, but it is far easier to imagine him setting the occasion alight.

Beyond that, anything and everything seems possible because, as Deschamps says, “despite all he does well, he is still learning”.

As for the comparison with Brazilian Ronaldo, the French coach acknowledged after the game with Peru that there is some merit in it even if, he insisted, it is premature.

There is, though, one definite difference. “Kylian is quicker.”