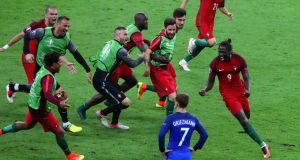 Now that it’s over we can admit it. Euro 2016 was a mediocre tournament, which culminated on Sunday night in a mediocre final and the coronation of a mediocre champion. But nobody can say there was injustice. Portugal were the best team on the night, and their first European Championship was richly deserved.

As a spectacle, the final never really recovered from the loss of Cristiano Ronaldo to a knee injury after his fateful collision with Dmitry Payet in the 8th minute. In his absence it became cruelly apparent that Ronaldo has more star power as the other 21 players combined.

When a great player is forced out of a game it invariably leads to complaints about violent play, but if you believe that football is better as a contact sport then you also have to accept that injuries will happen.

There is a case that the refereeing has been inconsistent. Ireland benefited from some lenient calls in the first quarter-hour against Italy, when James McClean, Jeff Hendrick and James McCarthy got away with some heavy tackles. Meanwhile Mats Hummels missed the semi-final against Italy for picking up two yellow cards, one of which was for one of the best-timed tackles of the tournament.

We can say that if Payet was trying to injure Ronaldo on purpose, he chose a pretty odd way to go about it. Nobody tries to take out an opponent by kneeing them in the knee while averting their eyes from the contact. It was a rough tackle, the kind of tackle you might expect from a player who doesn’t tackle much, whose coach has just impressed on him the need to get into the opponent’s best player and rattle his cage. “Don’t stand back and admire him.”

So Payet crashed into Ronaldo, and it was Ronaldo’s bad luck that his studs caught in the turf and his knee twisted in the contact. It was fully 15 minutes before Portugal’s superstar accepted that his dream really was over, and left the field on a stretcher to a standing ovation from the entire crowd at the Stade de France.

Almost every star remaining in this game was wearing a blue shirt. France outmatched Portugal all over the field. The disparity was particularly apparent in the physical size and strength of the players. The Portuguese had struggled to the final winning only one match inside 90 minutes, and they now had to cope with the loss of their greatest-ever footballer. Everything was set up for France to put on a show.

So what were they so afraid of?

The truth that will forever haunt Didier Deschamps is that his team was afraid of losing. They were afraid of getting caught out on the break by a Portuguese side made up of young boys and old men. They didn’t trust themselves to put Portugal away.

Those Portuguese were roared on by fans whose support never wavered. With 82 minutes on the clock, Nani cracked a speculative shot over the bar from range. The Portuguese fans briefly broke off from their constant clapping and chanting to try to scream some inspiration into Nani, who looked out on his feet. The French who occupied most of the stadium sat and stared. Their team had lost them a while back.

The silence of this French crowd told you everything. The sort of people that get tickets to see France play a tournament final in Paris are not the world’s most fanatical football fans. These are the kind of supporters who are only thrilled by displays of bravery so ostentatious that even they can recognise what’s going on - but bravery means risk, and Deschamps’ France didn’t want to take any. Even casual supporters know fear when they smell it.

Paul Pogba, the most sought-after young midfield player in Europe, stalked about the centre of the field displaying no understanding of how to make himself useful. The game passed him by. If you were seeing the France team for the first time, and were told that one of the midfielders was worth €120 million, you would probably have chosen Moussa Sissoko, who combined superb athleticism with subtle touches in the sort of performance he seldom deigns to produce in the colours of Newcastle United.

Antoine Griezmann was a livewire but he was struggling to spark off his dud partner Olivier Giroud, who was as inert as he usually is in the bigger games. Griezmann came close with a magnificent headed effort in the first half, but will regret the sitter he missed in the second. Gignac, who can never have expected that one day he’d wear the French 10 made famous by Platini and Zidane, came closest for France with his shot against the post in injury time.

Kingsley Coman came on for Payet and created some scary moments for Portugal with his speed and direct dribbling, but nothing was coming together on the collective level for France. Until they finally succumbed to a massive collective failure.

The last time France suffered a football disappointment on this scale, David Ginola took the blame. This time there can be no easy scapegoat. Too many French players were to blame. Sagna’s throw-in was careless. Gignac and Griezmann’s challenges ineffectual. Sissoko stood and watched while Sagna put in another weak challenge. Koscielny groped at Eder but failed to slow him up, while Umtiti ran along in front of him not offering any resistance. Lloris was beaten from 25 yards by a player whose time at Swansea finished with a record of 18 games, zero goals.

Ronaldo celebrated the goal alone, walking down the sideline pumping his fists to himself, somewhere between ecstasy and tears. He had not quite managed to join the team in the Promised Land, but they would never have got there without him. He had dragged his team to the final and they had repaid the favour. Maybe Ronaldo would have preferred to have scored the winning goal. But the joy on his face as he lifted the trophy told you that this way was good enough.

1 Ken Early: Project Big Picture endangers cushy position of ‘bottom 14’
2 Stockdale and Ringrose on board with expansive Irish game plan
3 The Offload: Spectre of doping hangs heavy over South African rugby
4 Bennett girding his loins for impossibly unpredictable Vuelta
5 GAA expected to go ahead with championship under Level 5
Real news has value SUBSCRIBE
Crossword Get access to over 6,000 interactive crosswords