Ken Early: Mourinhoball will be real winner of the World Cup

Pace, power, and passion: José’s kind of football is on its way back to the top 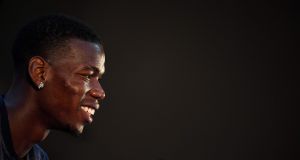 France midfielder Paul Pogba is among the players who have dominated in the tournament. Photograph: Franck FIfe/AFP/Getty Images

José Mourinho has kept busy during the World Cup with a punditry gig on RT (formerly Russia Today). Listening to his analysis, you quickly realise that you are actually watching early Manchester United 2018-19 press conferences. He’s praising Paul Pogba for humbly submitting to a water-carrying role in front of the French defence, or he’s wistfully rhapsodising about the amazing qualities of Ivan Perisic, the powerful Croatian winger he’s spent the last two years telling Ed Woodward to sign . . . and so on. José never really switches off.

But what’s even more notable is how happy he looks: grinning, relaxed, the soul of good cheer. Maybe the strength of this impression is due to the contrast with his normal demeanour. Mourinho is happy because he loves what he is seeing on the pitch. Last season he was often accused of being yesterday’s man. Russia 2018 suggests that, when it comes to the international game at least, José’s kind of football is on its way back to the top.

1 Young homeless mother may have been dead in tent for a number of days
2 Aldi, Lidl bow to pressure to ban non-essential ‘middle aisle’ sales
3 Bodies of mother and two children removed from south Dublin house
4 Europe enforces restrictions to avoid ‘millions’ of deaths
5 Cork shootings: Gardaí believe older son was shot multiple times
6 Mazda’s first EV requires mental recalibration
7 The real Contagion virus is out there and it’s causing virologists to worry
8 Michael Harding: Three reasons you’ll never see a cat in Donegal
9 In rural America, support for Donald Trump is complicated by the pandemic
10 Mother of two sentenced to life in jail for murder of former husband
11 Man jailed for five years for killing 7ft 5in Belarusian man
12 Cork shootings: Gardaí find lengthy apparent suicide note on one of the dead men
13 Finn McRedmond: Why did the Tories get it so wrong over feeding children?
14 Mother and two children found dead in Dublin home
15 Can Big Tech’s backing install Biden in the White House?
16 Medical gaslighting: The women not listened to or viewed as overdramatising or catastrophising
17 ‘I don’t want to be in Mountjoy Prison, nobody does’
18 Dublin City Council seek use of Docklands tower block for social housing
19 Shocked locals hold vigil for mother and children found dead in Ballinteer
20 Newton Emerson: Money talks and waffle walks in Shared Island initiative
21 Johnson’s Brexit Bill set to be blocked by House of Lords
22 ‘I actually didn’t know Ireland existed. But I read about it and knew it was perfect for me’
23 Six Nations: Paris win will be ‘massive fillip for Ireland’, says Paul O’Connell
24 How long can Government afford to keep State pension age at 66?
25 No grand conspiracy to protect those responsible for mother and baby homes
26 Second-level teachers vote for industrial action over school safety and pay
27 Michael McDowell: We must check if this Covid-19 lockdown is really necessary
28 Coronavirus: Six deaths and 675 further cases reported in Republic
29 Calm down covidiots, it’s nothing personal
30 Six within 60: homes to buy within an hour of the M50
31 France resumes lockdown in face of ‘harder, more lethal’ second wave
32 Revenue accused of harassing businesses over Covid wage subsidy scheme
33 Kanturk farm shootings: A timeline
34 Department insists schools are safe as secondary teachers back strike action
35 Six Nations - France v Ireland: Kick-off time, TV details, permutations, team news and more
36 Covid-19 is not a matter of opinion or politics
37 Armenians hope their fighting spirit will save them amid Nagorno-Karabakh conflict
38 Mother and Baby Home survivors can seek access to personal records
39 Róisín Ingle: Five ways to find joy in a pandemic. Only one of them is illegal
40 Updating an outdated concept in body armour
Real news has value SUBSCRIBE