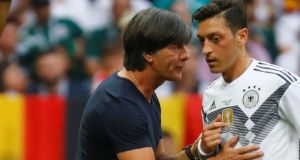 Joachim Löw accepted his defending champions had been “negligent” and “haphazard” after Germany’s Group F defeat against Mexico in Moscow.

“The next game is vital for us, we have to win it,” Löw said of a team who had lost their opening game at a World Cup for the first time since 1982.

Not that the omens are too bad: West Germany reached the final on that occasion. But at the Luzhniki Stadium Löw faced an unexpectedly hostile post-match reception.

Questions were asked about a selection that looked unbalanced in the first half, and about the performance of Joshua Kimmich, who was overrun at times on the German right. One local journalist even suggested Löw should have brought along the young team that had come to Moscow last year and played with such verve in a Confederations Cup semi-final victory against the same opponents.

The contrast with the Mexico manager, Juan Carlos Osorio, was profound after what must rank as one of the country’s finest victories. “We try to give joy,” Osorio said. And this was a supremely entertaining show of counterattacking football, deliriously received by a strong Mexican support.

For Osorio victory was more a matter of planning than adrenaline, as he spoke openly about his long-standing intention to play on German weak points. “We had plans six months ago to have two quick players on the wings,” he said. “We chose Hirving [Lozano, the game’s only goalscorer], our quickest player, and Miguel Layún, an offensive midfield player.

“In the first half we managed today to hit them on the counter many times. We could have scored earlier. With all due respect we were superior to them. In the second half they attacked more and they made the substitutions they tend to make. We had prepared for the use of Mario Gomez in attack. We practised defending with four defenders and three players up front and that was how we almost scored a second goal. I’m very satisfied with what we did.

“For the players today the phrase was to play for the love of winning not the fear of losing. And that is exactly what they did. They played with real bravery.”

Löw, whose side now face Sweden on Saturday, was naturally gloomier, denying he had underestimated Mexico and insisting his players are in good physical shape. “It’s very disappointing and very usual,” he said. “In so many tournaments before we won the first game. But we have to deal with that. In the next match we have to be much better.” – Guardian service