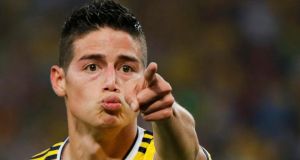 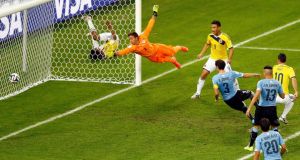 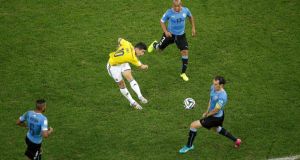 Uruguay followed their shamed striker Luis Suarez out of the World Cup as the furore over his lengthy ban for biting was eclipsed by a goal of spectacular beauty by Colombia’s young star James Rodriguez.

It was going to take something very special to stop this match being all about Suarez — and 22-year-old Rodriguez provided it with the first of his two goals to set up a 2-0 win for a Colombian side who have made light of the injury-related absence of their own missing striker Radamel Falcao.

Rodriguez, a team-mate of Falcao’s at Monaco, scored the goal of the tournament so far and has emerged as one of the outstanding players of the World Cup, with five goals now to his name.

His moment of brilliance came in the 28th minute when Abel Aguilar looped a high header to the edge of the penalty box, and Rodriguez — after a quick glance towards goal — controlled it on his chest and hit a magnificent volley on the turn that skimmed over the goalkeeper’s fingertips and crashed in off the underside of the crossbar.

It was a goal that had everything: control, vision, power and sumptuous technique — and a goal worthy of sending Colombia into a quarter-final where they will be doughty opponents for Brazil.

If the one shame is that there will be no rematch of the Brazil v Uruguay 1950 final, that is more than compensated for by the fact that Rodriguez will be playing.

Until his wondergoal, this had been a typical South American encounter: plenty of skill, crunching tackles, but little to shout about. It really did seem as though this was a game that needed Suarez’s undoubted talents to light it up.

There had been no mistaking the undercurrent to the match, both the Uruguay players and fans made sure of that: Edinson Cavani tweeted a picture of the team surrounding Suarez’s number nine shirt, while the supporters came armed with thousands of Suarez face-masks. Initially, Uruguay broke up the game with some muscular tackling — often just over the line of legality.

Colombia’s Juan Zuniga did break forward on a lung-busting run but his shot was too straight, into the chest of Uruguay keeper Fernando Muslera.

It was honours even until Rodriguez’s moment, but after that Uruguay began to show more ambition. Cavani put in a dangerous cross that Carlos Sanchez just cleared, then the Paris St Germain striker struck a fierce free-kick that sailed just over the bar. Buoyed by that Uruguay ended the half on the up.

Their own Rodriguez, Atletico Madrid midfielder Cristian, tried his only volley but Colombia keeper David Ospina parried it away desperately. If the first goal had been all about individual excellence, the second was a wonderful team goal.

Rodriguez started the move and several passes saw the ball shifted out to the left flank where Pablo Armero’s cross to the far post found Juan Cuadrado. The Fiorentina midfielder rose majestically to direct a classic header back to the edge of the six-yard box, where Rodriguez was waiting to fire home.

It was looking desperate for Uruguay, even more so when Cristian Rodriguez again found Ospina unbeatable after hitting a low, raking drive from 25 yards.

Cavani then found Christian Stuani with a wicked delivery to the back post but the substitute striker’s header was wide — it was the sort of chance that Suarez would have snapped up.

Maxi Pereira nearly bundled his way through to score but Ospina came charging out to block. Colombia now face the toughest of tasks, against the hosts in Sao Paulo.

It will be James Rodriguez — who was given a standing ovation when he was substituted with four minutes left — against Neymar, and on this evidence we are in for a treat.