Jack Charlton was ready to quit over sponsorship row with players 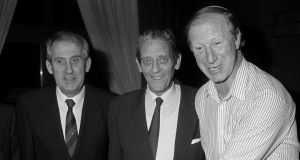 When Opel signed up as the FAI’s main sponsors in a four-year deal worth £100,000 per year in 1986 it looked like a decent bit of business by the association. Two years, it came to be regarded as a stroke of genius by the car manufacturer and its Irish MD, Arnold O’Byrne. Even that, though, was eclipsed by the early 1990 renewal at just 25 per cent over the original price.

Was it the best sponsorship in the history of Irish sport? “Modestly, I’d say yes,” replies O’Byrne. “We certainly got all the kudos and the research we did at the time said it had been the most successful of all time.”

O’Byrne had returned home after spending a long stint at one of the company’s plants in Luton. “It was a pretty miserable time,” he recalls. “Interest rates were high and unemployment was bloody awful and I was struggling to keep Opel alive. The parent company was talking about abandoning ship.

When the team did well, others circled and Opel had to go to court to stop Irish Permanent cashing in on a deal they had done with some of the players. They won but that wasn’t enough for Jack Charlton, who had become friendly with O’Byrne and demanded that a senior member of the squad call the man behind the official sponsorship to apologise.

O’Byrne was heading away to a conference but Charlton told him that the player he regarded as the ringleader would call at 4pm on the Monday. “And at four on the dot, he called. I was so relieved that the call came through, I called Charlton and told him: ‘I don’t know whether you were bluffing but he called, so drop it.’”

Cocooned The tournament, he recalls, was like one long, wonderful adventure

. “We were away and cocooned almost. I travelled and stayed in the hotel and we really had no idea of what was happening until we arrived home.

“I remember on the way home we flew over O’Connell Street and the pilot said ‘I want you all to look down to see what’s waiting for you’. I’ll never forget it. When we got on that bus there were people hanging out of every single thing that they could climb.

“We came down to Clerys and there were fellas up on top of the Daniel O’Connell [statue]. It was amazing but also frightening. I was at a function recently and I was talking to a guy who had been a garda, a motorcycle escort for the team on the way down O’Connell Street that day, and we were saying, we didn’t know how somebody wasn’t killed.

“The people were just spilling in front of the bus. In the end, Charlton and myself came down from the top because we couldn’t bear to look at it anymore.”

1 Mary Hannigan: ‘Bitches Who Stood’ might be better viewed as useful allies
2 Game Changers: Living beyond fear puts Alex Honnold above all others
3 James Cronin anti-doping case may be reopened
4 ‘Everyone would play tomorrow if we could’ - Johann van Graan
5 Leinster’s clash with Saracens will open Champions Cup quarter-final weekend
Real news has value SUBSCRIBE
Crossword Get access to over 6,000 interactive crosswords