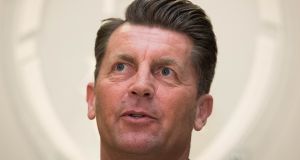 Colin Bell has said that his initial ambition is simply to make the women’s Irish senior team competitive after which they can start to worry about beating the European game’s better sides and, ultimately, qualifying for major tournaments.

“We have these visions and dreams,” said the 55 year-old as he was unveiled at the FAI’s headquarters in Abbotstown on Monday, “but I think you have to be realistic.

“We’ll set our goals step by step and look to ensure we can compete at a high level but it’s an exciting time here in Ireland; there’s a lot of good young talent coming through and experienced players who I’m sure can improve. The first job is to get in and see what we are capable of doing.”

Bell, who has spent almost all of his coaching career in Germany where he guided Frankfurt to the Champions league title and most recently worked with Sand, the club where Dubliner Diane Caldwell plays, said that his predecessor, Sue Ronan, has given him a good base to work on but that he still sees a great deal of potential for improvement.

“I see five or six areas in which I would like to see improvement but that’s the same with every team,” he says. “I’ve seen the example of Diane, how she has really improved over the last six months, playing in Germany and training six or seven times a week so I think you can see how much improvement is possible.

“I love football, it’s my passion and I want the players to have that passion when they’re representing their country but it has to be intelligent as well. We need intensity. And the Irish girls have that bite. We just need to channel it now.”

Bell worked closely for a time with Jürgen Klopp at Mainz and says the pair share much the same outlook on the game. “At Mainz he developed this football philosophy that you now see at Liverpool, though obviously with more quality. But it’s something that I also took to: to play at high intensity to kill the game of your opponent and then bring your own game through.”

He acknowledges that so many of his players playing in I at home in Ireland at a time when the league here is still really only in its infancy is an issue but suggests the challenge is for the club here to improve. In the meantime, he says, he will work closely with all of his players to prepare them for the next their next World Cup qualifying campaign.

Ireland finished fourth in their most recent European Championship qualification attempt, four points behind Portugal and Finland and 15 adrift of group winners Spain. The draw for the World Cup will be made on April 25th.

Before that, Bell will get a first opportunity to work with the squad at the start of next month when they take part in the Cyprus Cup. Ireland kick-off their tournament with a game against the Czech Republic after which they will face Hungary and Wales in quick succession before wrapping up with a positional play-off match.

Chelsea’s Niamh Fahey misses the tournament through injury but Emma Byrne, Megan Campbell and Stephanie Roche are amongst the established internationals included in his squad for the trip.