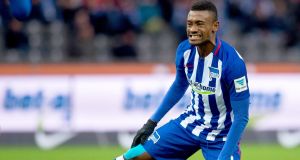 Hertha’s Salomon Kalou: ‘ I would also like to apologise to those shown in the video who did not know that I was broadcasting live.’

Bundesliga club Hertha Berlin have suspended forward Salomon Kalou after he posted a video on Facebook which showed himself and team-mates shaking hands and displaying a casual approach to Covid-19 guidelines.

The club also said “this was the conduct of a single player” and denied that the squad do not take social distancing and hygiene rules seriously.

The Ivorian apologised for his behaviour which the German Football League described as “absolutely unacceptable” and which some media suggested could even hamper the Bundesliga’s hopes of restarting after the coronavirus outbreak.

The Bundesliga has been suspended since mid-March but is hoping to convince the government that it is safe to restart in the next few weeks. A decision is expected on Wednesday.

Hertha, which said the film was made after the entire squad had tested negative for coronavirus, admitted that the video at one point showed players shaking hands while Kalou was also seen to interrupt a team-mates’ medical test.

“Salomon Kalou’s video from the dressingroom violated basic team rules and showed behaviour that is neither appropriate to the situation nor in accordance with the club’s rules of conduct,” said the club.

“Hertha BSC has therefore decided to suspend him from training and playing with immediate effect.”

It added: “Salomon Kalou was tempted by the negative test results to greet his team-mates in his dressing room, sometimes with a handshake, contrary to the clear announcements of the hygiene officer,” it added.

Hertha’s general manager Michael Preetz said that Kalou had caused the club “a great deal of damage” and “created the impression that individual players are not taking the corona issue seriously.”

Mr Preetz said the club had “intensively” explained hygiene and distance rules to all its employees.

Former Chelsea, Lille and Feyenoord forward Kalou, who has made about 90 appearances for Ivory Coast, apologised.

“I did not really think about it and I was glad that our tests were all negative,” he said. He added he was particularly concerned about the coronavirus situation in Africa.

“I would also like to apologise to those shown in the video who did not know that I was broadcasting live and whom I did not want to put in such a situation.”